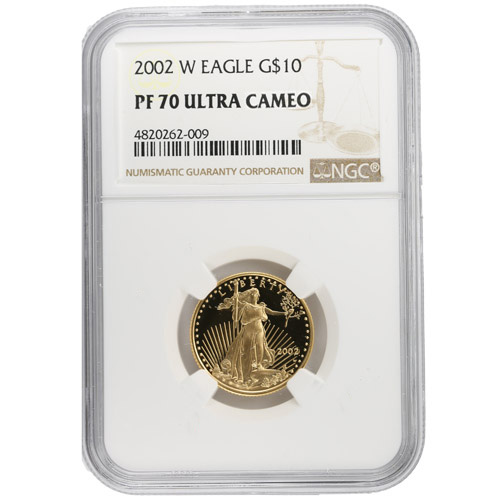 The 2002 issue of Gold Eagles from the United States Mint occurred a time when the price of gold began the first of many years of steady upward growth. Though gold opened at $278 per ounce, by year’s end it was definitively above the $300 level and would only grow in the coming years. The 2002 1/4 oz Proof Gold American Eagles are available to you currently online at Silver.com with perfect certifications from the NGC.

Demand for the Proof Gold Eagles rebounded in 2002 after dropping significantly in 2001. Though none of the coins moved above their 2000 mintage figures, each one posted modest gains. The 1/4 oz Proof Gold American Eagle had a mintage that was nearly 4,000 coins higher than the previous year.

From 2001 to 2004, all four Proof Gold American Eagles would see demand stick within a stable range. For the 1/4 oz Proof Gold Eagle, that range was roughly 4,500 coins over the four-year release period, with the low point coming in 2001 and the high point in 2003. Again, as with many recent releases, the 2002 1/4 oz Proof Gold Eagle had the second-highest mintage behind only the 1/10 oz coin.

On the obverse of 2002 Proof Gold American Eagle coins is Augustus Saint-Gaudens’ vision of Liberty. This art was created in 1907 and appeared on the $20 Gold Double Eagle circulation gold piece until 1933.

These 2002 1/4 oz Proof Gold Eagles have PF70 certifications from the NGC. Coins in this condition showcase full, original mint luster with no detracting flaws. As ultra-cameo specimens, these coins have strong, frosted designs and deeply-mirrored, clear background fields.

We encourage Silver.com customers to contact us with questions at 888-989-7223. You can also connect with us online through our live chat and email features.