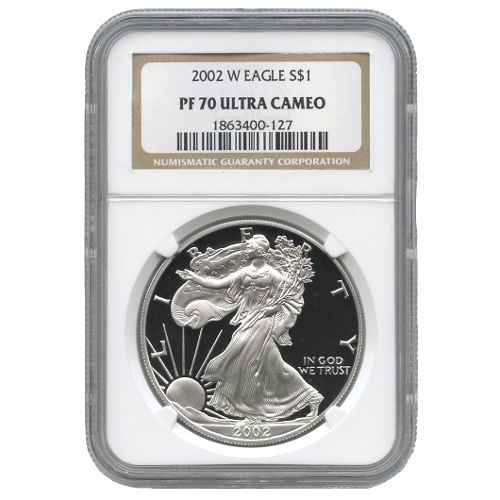 After the 15th anniversary celebration of the Silver American Eagle coin in 2001, the US Mint might have predicted a decline in the demand for and popularity of the Silver Eagle series. However, the program maintained an upward march for one more year, hitting 11.1 million coins in total for the year. Today, the 2002-W Proof Silver American Eagle coin is available on Silver.com.

US Mint sales of Proof Silver American Eagle coins in 2002 failed to reach the maximum mintage established at 750,000 coins. Silver prices remained extremely low in 2002, with the average price throughout the year holding around $4.60 per ounce. Prices ranged from a high of $5.10 per ounce to a low of $4.40 per ounce over the course of the year.

On the obverse of each coin you’ll find the iconic Walking Liberty design from Adolph A. Weinman, which originally featured on the Walking Liberty Half Dollar from 1916 to 1947. The reverse is dominated by the heraldic eagle of the United States. Originally created in 1792, it has been refined many times. For these coins, US Mint Chief Engraver John Mercanti had the task of refining the design.

Each 2002-W Proof Silver American Eagle listed here is a PF70 specimen from the NGC. Coins in this condition have full, original luster from the mint and no detracting flaws. UCAM coins have strong, frosted design sets and contrasting deeply-mirrored, clear background fields.

Feel free to contact Silver.com at 888-989-7223 with any questions. You can also reach out to us online using our live chat and email options. To see similar items, be sure to check out our selection of NGC Graded Proof Silver Eagles. 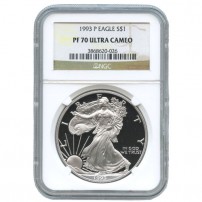 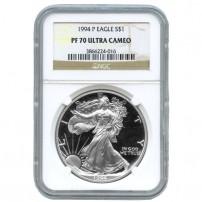 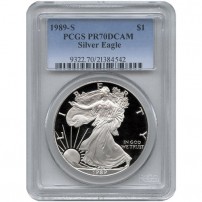