At this point in program history, 2002 would prove to be the second most successful year in Silver American Eagle program history. Both versions of the coin, bullion and proof, were experience immense demand, and the US Mint would see sales figures for the popular coins it hadn’t seen since 1987. Today, the 2002-W Proof Silver American Eagle coin is available as a perfect specimen on Silver.com.

Total mintage in 2002 jumped from 9.7 million the year before to 11.1 million. The United States Mint did not sellout the full authorized mintage of Proof Silver American Eagles in 2002, the first time this happened in several years. According to a historical silver price chart, the price of silver was relatively steady throughout the year, averaging $4.60 per ounce but ranging from $4.40 to $5.10 throughout the year.

On the obverse, the Walking Liberty design from Adolph A. Weinman remains a fixture on the popular coins. Former-US Mint Chief Engraver John Mercanti’s heraldic eagle design continues as a mainstay on the reverse side of the coins.

If you have any questions, please don’t hesitate to ask. A Silver.com associate is available at 888-989-7223. You can also connect with us online using our live web chat or email address. 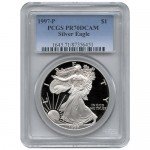