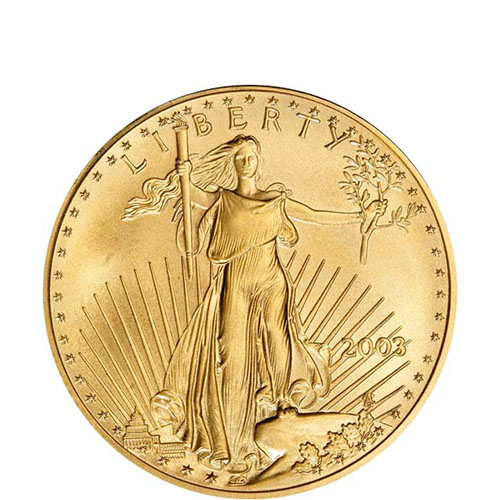 The Gold American Eagle coin is the official gold bullion coin of the United States. They were first available in 1986 in bullion, proof, and burnished versions. The Gold Eagles are guaranteed by the US government to contain the declared amount of actual gold weight in troy ounces, and this gold must come from sources within the US. When it looked like the price of gold would continue to increase in 2003, the US Mint increased their production of all 4 denominations of the 2003 Gold American Eagle coins. The 1/2 oz Gold Eagles did see the smallest increase over 2002 mintage numbers, increasing from 70,027 in 2002 to 79,029 in 2003. Right now, Silver.com has the 2003 1/2 oz Gold American Eagle coin available for purchase.

The Gold American Eagle obverse depicts a full-length figure of Lady Liberty walking directly towards you. Her hair is flowing in the breeze, she is carrying a torch in her outstretched right hand and an olive branch in her left hand. At the bottom of the coin, to the left of her right foot is a depiction of the Capitol building. This Lady Liberty design is the creation of Augustus Saint-Gaudens.

The Gold American Eagle reverse depicts a male eagle, carrying an olive branch, flying towards a nest with a female eagle and a couple of eaglets. This design was created by Miley Busiek and sculpted by Sherl J. Winter, and is said to embody the importance of unity and family tradition in America. It includes several inscriptions as well.

In the early 1900’s, President Theodore Roosevelt was deeply dissatisfied with the status of US coins. He chose Irish-born Augustus Saint-Gaudens to redesign the nation’s coinage. Saint-Gaudens designed the double eagle coin in the mid-1900’s, which is still considered to be one of the most beautiful American coins ever issued. It is the obverse design from this coin that is used as the obverse on the Gold American Eagle gold bullion coins that were authorized by the Gold Bullion Coin Act of 1985.

Do you have questions? The Silver.com Customer Service team is available to assist you. We can be reached via phone at 888-989-7223, via our online live chat, or via our email address.