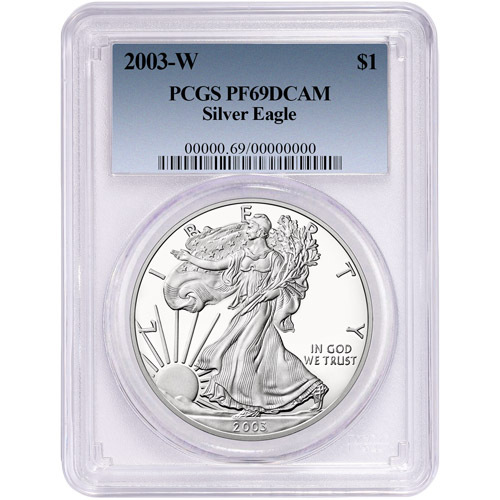 Each 2003-W 1 oz Proof Silver American Eagle in this product listing at Silver.com comes with a near-perfect certification. Coins in PR69 condition exhibit full, original mint luster with no more than two minor detracting flaws. Acceptable flaws at this grade level include only minuscule contact marks or hairlines that must be located outside of the primary focal points of the coin. DCAM stands for deep-cameo and refers to the contrast between the strong, frosted designs and deeply-mirrored, clear fields.

The 2003 Proof Silver Eagle saw demand jump just over 100,000 coins year-over-year compared to the 2002 release of the coins. In fact, the 2002 date mark was the only coin in the period from 1997 to 2006 that did not experience an increase in demand compared to the previous year. Overall, the mintage in 2003 was higher than any date mark since 1987.

The obverse of 2003-W 1 oz Proof Silver American Eagles features the image of Walking Liberty. In this left-profile relief, Liberty is shown walking toward the sun as it rises over a mountain on the horizon. Draped in the American flag, Liberty extends her right hand toward the sun while carrying the branches of oak and laurel in her left hand.

On the reverse of the 2003 1 oz Proof Silver Eagle is the heraldic eagle of the United States. The design shows a bald eagle in front-facing relief in support of the US national shield while it clutches the arrows of war and the olive branch of peace in its talons. The design includes a triangular cluster of 13 stars over the head of the eagle.

If you have any questions, please feel free to ask. Silver.com customer service is available to assist you at 888-989-7223, online through our live chat, and via our email address.