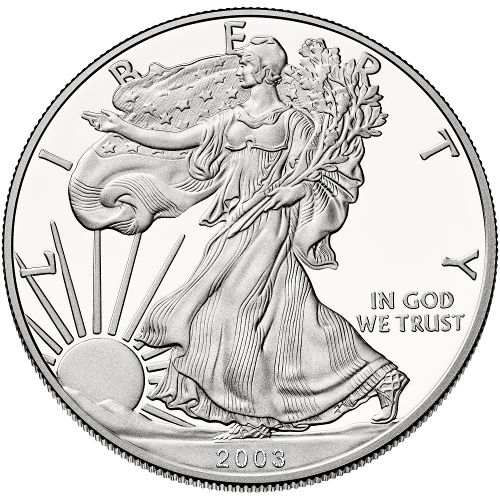 Authorized with passage of the Liberty Coin Act of 1985, the Silver American Eagle has served as the official silver bullion coin of the United States for 30 years as of 2016. Today it is the single most popular coin program in the world, and its proof collector’s version is in demand annually among numismatists. Right now, Silver.com offers the 2003-W Proof Silver American Eagle coin for purchase.

The previous year saw the Silver American Eagle coin program earn an extension from Congress. The original Liberty Coin Act gave the Treasury Department and US Mint access to silver stores in the Defense National Stockpile to strike the coins for sale by the federal government.

The 2002 extension issued to the Treasury and the US Mint allowed the former to purchase additional stores of silver on the open market to continue the Silver American Eagle for the foreseeable future. As always though, the legislation stipulated that all silver used must be sourced from within the United States.

If you have questions, don’t hesitate to ask. Silver.com associates are available at 888-989-7223, online using our live chat, and via email. If you are interested in similar products, be sure to check out our entire selection of Silver Bullion Products.