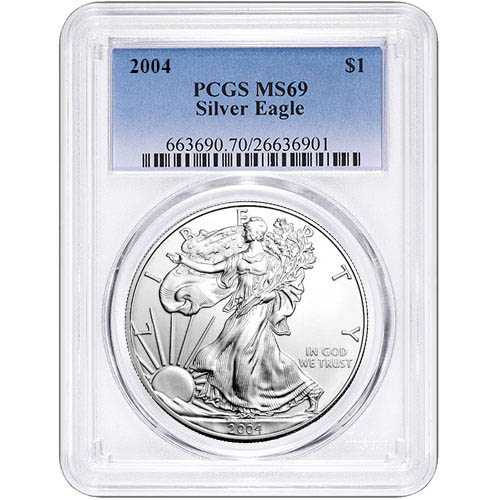 Although the 2004 Silver American Eagle delivered a slight increase in demand from the previous year, the growth in mintage was modest at just under 400,000 additional coins sold. Even with the growth, the Silver Eagles remained within the 8.6 million annual average for the 2003-2005 coining period. The 2004 1 oz Silver American Eagle coin is currently available to you for purchase online at Silver.com with a PCGS certification.

Silver American Eagle coin demand remained relatively flat in 2004. With a total mintage of 8,882,754 coins, the program enjoyed a slight increase over 2003. The following year, 2005, would deliver the lowest increase in the program’s history with a jump of just 8,271 coins in total mintage.

The price of silver per ounce showed greater activity in 2004 than the change in demand for the Silver Eagle coins themselves. The overall average for the year increased nearly $2 per ounce to $6.67 per ounce. This was the highest average annual price for silver since the 1986 introduction of the Silver American Eagle. More impressively, the price of silver spiked above the $8 per ounce mark at various times during the year.

On the obverse of 2004 1 oz Silver Eagles is the design of Walking Liberty. This image was created by Adolph A. Weinman in 1916 for the nation’s circulating half-dollar coin and featured on that specimen until 1947.

The reverse face of 2004 Silver American Eagle coins includes the design of the heraldic eagle of the United States. This image has been modified and modernized at various points in US history dating back to its 1794 introduction. This particular version was modernized by John Mercanti in 1986 and included the notable addition of a triangular cluster of 13 stars over the eagle’s head.

These 2004 1 oz Silver American Eagle Coins are available to you in near-perfect condition. Mint State 69 coins have full, original mint luster and a maximum of two minor detracting flaws. Acceptable flaws at this level include minuscule contact marks or hairlines.

We encourage Silver.com customers to call us with any questions at 888-989-7223. You can also reach out to us online using our live chat service or email address.