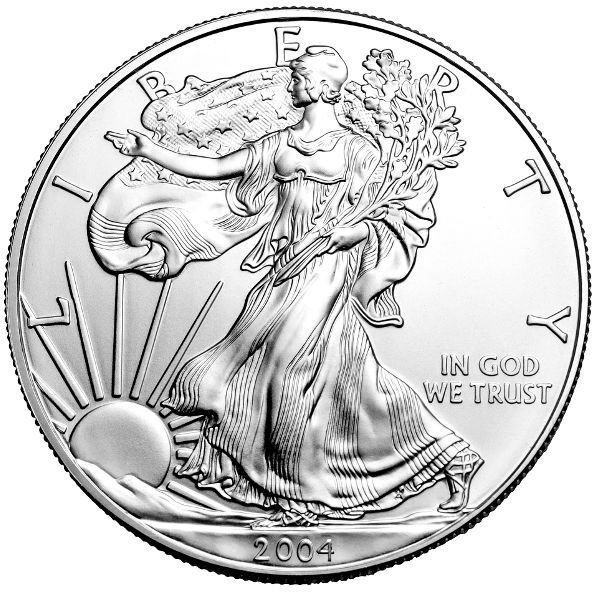 The 2004 1 oz Silver American Eagle is another in a long line of America’s official silver bullion coins produced by the US Mint. It shares a number of features with all other Silver American Eagles which includes a weight of one troy ounce, a face value of $1 USD and a purity of 99.9%. The particular coins offered in this collection are available in uncirculated condition.

When it comes to iconic American images, there are no two that better symbolize America than Lady Liberty and the bald eagle. The bald eagle was adopted as the national emblem of the US federal government in 1782. Revered for its strength, longevity, and majesty, the bald eagle came to symbolize America. Meanwhile, Lady Liberty has stood guard at the gates of freedom since the late 19th century, greeting all immigrants to this country seeking a fresh start in a free land.

The administration of President Ronald Reagan developed the idea of the Silver American Eagle as a way to raise money and offset the federal budget deficit. The administration pushed legislation, first drafted in 1981, to take silver from the Defense National Stockpile and use it to mint commemorative silver coins for sale to the public. The very first Silver American Eagle coin was struck at the San Francisco Mint on October 29, 1986. Since that day, the San Francisco Mint, Philadelphia Mint, and West Point Mint have taken on the responsibility of producing these coins year after year.

All Silver American Eagle coins have the same images emblazoned on the obverse and reverse sides of the coin. On the coin’s obverse is Adolph A. Weinman’s “Walking Liberty” image. Lady Liberty is featured walking toward the setting sun in the west. Above her head is the word “Liberty,” while the phrased “In God We Trust” is stamped at her heels. John Mercanti, the chief designer at the US Mint, created the heraldic bald eagle featured on the coin’s reverse. His bald eagle holds an olive branch in its right talon and arrows in its left. Above its head, 13 stars representing the original 13 American colonies. Weinman’s design was created in 1916, while Mercanti’s was crafted in 1986 as a special feature for the Silver American Eagle coins.

The US Mint produced the 2004 1 oz Silver American Eagle at the same location as all previous and subsequent commemorative silver bullion coins. The 2004 1 oz. Silver American Eagle is available today in uncirculated condition. If you have any questions about these coins, you can reach one of our staff members by calling 1-888-989-7223 or using the online live chat feature. 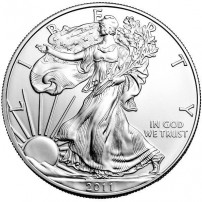