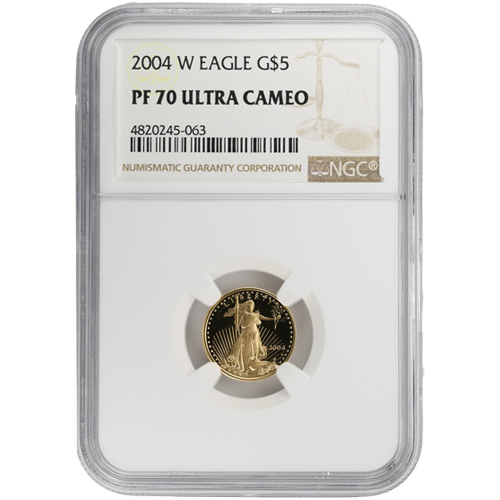 That coin that experienced the most significant decline in 2004 was the 1/10 oz Proof Gold Eagle. While the other coins in the proof series were down for the year, the worst of those was the 1,400-coin drop of the 1/4 oz coin. The 1/10 oz coin was, by contrast, down by nearly two-and-a-half times that figure. The 2004 1/10 oz Proof Gold American Eagles are available to you currently for purchase at Silver.com in perfect condition.

The United States Mint responded to rising gold prices in a third straight year with its second consecutive increase in premiums on the Gold American Eagle proof coins. The combination of a slower rise in gold prices and a jump in premiums for initial purchase led to cooler demand for the Proof Gold Eagle coins.

On the obverse of the 2004 1/10 oz Proof Gold American Coin is Augustus Saint-Gaudens’ iconic vision of Liberty. Saint-Gaudens was commissioned by President Theodore Roosevelt in 1905 to help lead the charge in redesigning American currency in the early 20th century. This Liberty vision appeared on the $20 Gold Double Eagle from 1907 to 1933.

The reverse face of 2004 Proof Gold American Eagle Coins includes a unique design of American bald eagles. Designed by Miley Busiek in 1986, this design is exclusive to the Gold American Eagle collection. It depicts a male eagle flying over the family nest with a branch in its talons, while a female eagle in the nest protects a hatchling with her wing.

We encourage Silver.com customers to contact us with questions at 888-989-7223. You can also connect with us online through our live chat and email address options.