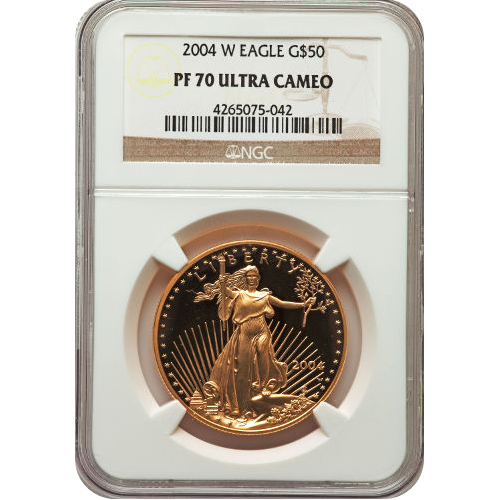 The 1 oz Proof Gold Eagle coin began a surge in 2004 that would eventually result in it becoming the top choice among collectors in this series. Although all four coins experienced drops in demand in 2004, the 1 oz gold coin experienced the least loss in mintage compared to 2003. The 2004 1 oz Proof Gold American Eagle Coin is currently available to you online at Silver.com in perfect condition.

The United States Mint issued the Proof Gold American Eagles in 2004 with individual mintage caps for each of the four weights and a separate cap on the 4-Coin Proof Gold Eagle Set. The coins were all down for the year in terms of demand, with the US Mint also raising the premiums for gold based upon rising prices. This was the second consecutive year prices went up.

On the obverse of 2004 1 oz Proof Gold American Eagle Coin is the image of Lady Liberty. Designed in 1907 by Augustus Saint-Gaudens, this image was originally used on the $20 Gold Double Eagle through 1933.

These 2004 1 oz Proof Gold Eagles have PF70 certifications from the NGC. Coins in this condition have full, original mint luster with no detracting flaws. The ultra-cameo label included with purchase highlights the presence of strong, frosted matte designs and deeply-mirrored, clear background fields.

We encourage Silver.com customers to call us at 888-989-7223 with questions. You can also connect with us online using our live chat and email features. 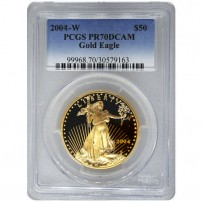 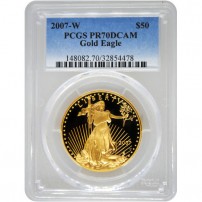