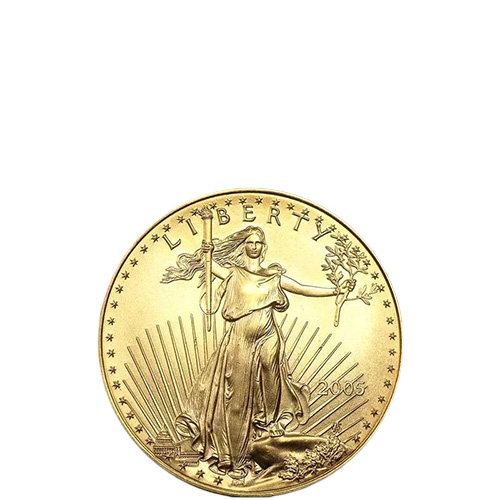 Any quantity available for $114.73 per coin over spot!

Being dissatisfied with the status of US coinage, in 1904, President Theodore Roosevelt commissioned new designs. He chose Irish-born Augustus Saint-Gaudens to redesign the nation’s coinage. Saint-Gaudens’ new Lady Liberty design initially appeared on the Double Eagle ($20) gold coins through 1933. It is a version of that Lady Liberty that is the obverse design on the Gold American Eagles today.

The obverse of the Gold American Eagle depicts the full-length figure of Lady Liberty created by Saint-Gaudens. She is walking directly at you. Her hair is flowing behind her, a torch in her outstretched right hand and an olive branch in her left hand. To the left of her feet is a depiction of the Capitol building.

The reverse of the Gold American Eagle depicts the family of eagles created by Miley Busiek and sculpted by Sherl J. Winter. One eagle, carrying an olive branch in its claws, is flying towards a nest occupied with an eagle family. This design is said to embody the importance of unity and family tradition in America. It includes several inscriptions as well.

Have questions? The Silver.com Customer Service team is available to assist you. We can be reached via phone at 888-989-7223, via our online live chat, or via our email.