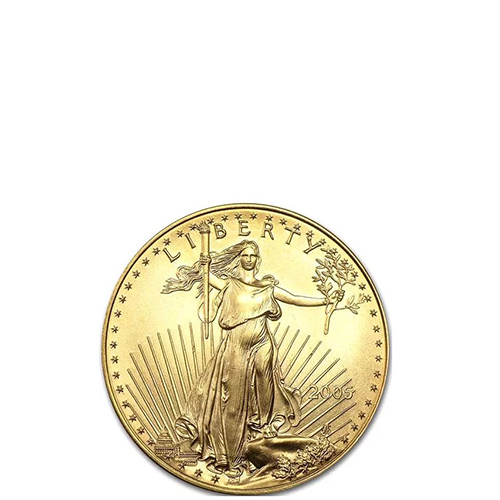 The Gold American Eagle coins were first issued in 1986. They are available in bullion, proof, and burnished coins, however, it is only the bullion version that was offered in all 4 weights immediately. The gold in the coins is required to come from sources within the US. And whether it be 1 oz, 1/2 oz, 1/4 oz, or 1/10 oz, the Gold Eagles are guaranteed to contain that amount of actual gold weight in troy ounces. Silver.com currently has the 2005 1/4 oz Gold American Eagle coin available for purchase.

President Roosevelt, being unhappy with the condition of US coinage, in 1904 selected Irish-born Augustus Saint-Gaudens to create a design to rejuvenate the nation’s coinage. The Lady Liberty design that Saint-Gaudens created appeared on the $20 Gold Double Eagle coins that were minted from 1907 to 1933. It is a version of that Lady Liberty that subsequently became the obverse design on the current Gold American Eagles.

The Gold American Eagle obverse depicts the Saint-Gaudens’ created full-length figure of Lady Liberty. She is facing directly at you, with her hair flowing behind her. Representing enlightenment, she is carrying a torch in her outstretched right hand. And representing the desire for peace, she is holding an olive branch in her left hand. To the left of her feet is a depiction of the Capitol building. Fifty stars encircle the outer rim of the coin.

The Gold American Eagle reverse depicts the Miley Busiek-created family of eagles that was sculpted by Sherl J. Winter. One bald eagle, carrying an olive branch in its claws, is flying towards a nest occupied with an eagle family. The bald eagle is considered the king of the birds of prey. It includes several inscriptions as well.

The Gold American Eagle coins are made of a sturdy composition of 22 karat gold. They are comprised of 91.67% gold, 3% silver, and 5.33% copper. Since their first issue in 1986, either the 1 oz or the 1/10 oz Gold Eagles have had top honors for the highest mintage numbers. The 1/4 oz Gold Eagles have most often come in third place, however, in 2005 their mintage numbers of 72,015 found them in last place.

Have questions? The Silver.com Customer Service team is available to assist you. We can be reached via phone at 888-989-7223, via our online live chat, or via our email.