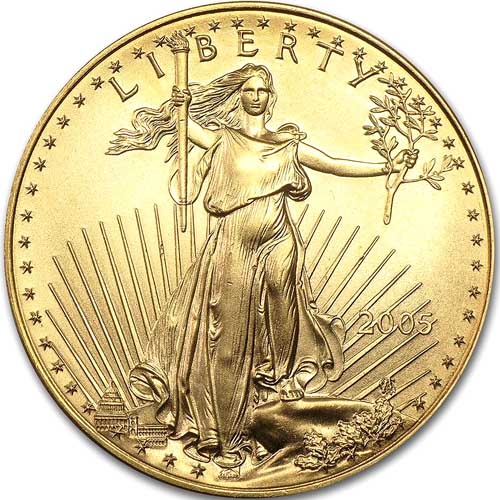 On the obverse of the Gold American Eagle is Augustus Saint-Gaudens’ iconic design of Liberty. She is featured with hair and robe flowing free as she holds the torch of liberty aloft in her right hand for a guiding light as she marches confidently forward from the nation’s capital.

The reverse of all 2005 1 oz Gold American Eagle coins includes Miley Busiek’s exclusive design of the bald eagle family. Used only on the Gold Eagle coin series, this image features a male flying over the nest which houses a group of hatchlings watched closely by a powerful female eagle.

During 2005, gold achieved an annual gain of more than 20%. After trading in a close range for the first half of the year, gold prices shot above $500 per ounce during the second half, rising from an opening price of $427.75 in January to a closing price of $513.00 per ounce in December.

These Gold Eagles are in BU condition. Coins in this condition show no signs of wear and tear, but you may notice minor flaws such as breaks in the luster, spotted surfaces, or contact marks from the striking of blanks.

We encourage Silver.com customers to reach out to us with any questions. Our customer service team is available at 888-989-7223, chat with us live online, or simply send us an email with your inquiries.