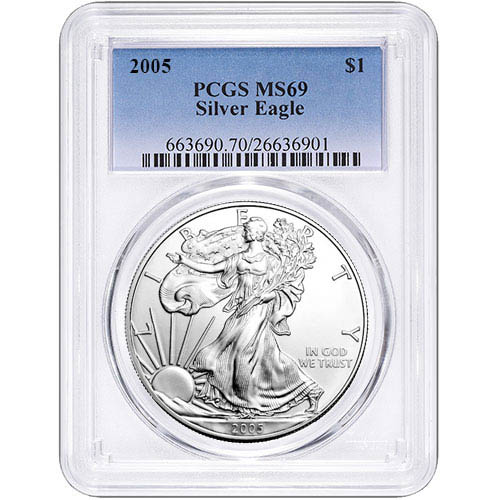 As silver prices pushed higher in 2005, demand for the Silver American Eagle bullion coins remained steady. The US Mint saw a nominal uptick in demand for the popular silver bullion coins in 2005, but it was still a significant year as it marked the last time in recent history that the coins had a mintage below 9 million. Right now, 2005 1 oz Silver American Eagle Coins are available to purchase online at Silver.com in near-perfect condition.

Each 2005 1 oz Silver American Eagle coin listed here at Silver.com is in Mint State 69 condition. Coins with this certification exhibit their full, original mint luster and present with a maximum of two minor detracting flaws. The only acceptable flaws at this grade level include minuscule contact marks or hairlines that must be located outside the primary focal points of the coin.

The final mintage for the 2005 Silver Eagles was 8,891,025 coins. This was just over 8,200 coins more than the year before and represented the lowest year-over-year growth the series has ever seen. It was the final year in a stretch of three releases that saw demand for Silver Eagles stick tightly in a range that averaged 8.6 million coins per year.

If you have any questions about these silver coins, please contact Silver.com. Our customer service team is available at 888-989-7223, online using our live chat, and via our email address.