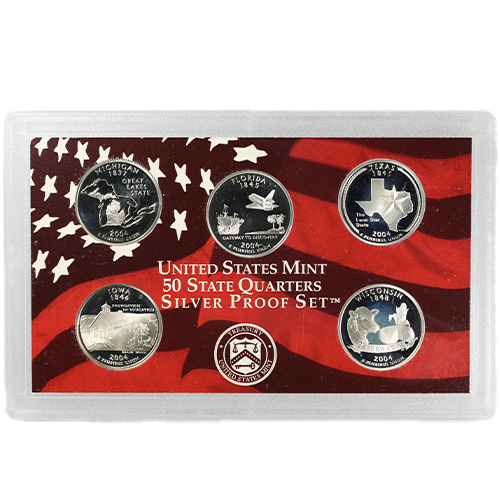 First introduced by the US Mint in 1992, the Silver Proof Set contains several coins struck in 90% silver. The 90% silver coins are the dime, the 5 State Quarters, and the half dollar. The mirror-like proof finish of all of the coins in the Set gives them an impressive shine. During their inaugural year, the Silver Sets proved quite popular, with a mintage of 1,009,586 sets. Sales then dropped off and it took until 2003 for the mintage numbers to again surpass 1 million. In 2005, the Silver Sets mintage was 1,069,679 sets, which was the 3rd year in a row of over 1 million sets. This set was made by the US Mint in San Francisco. Currently, these 2005 US Mint Silver Proof Sets are available for purchase online from Silver.com.

Throughout the early 2000’s, very few changes were made to the Silver Proof Sets. The number of coins per set, face value, and original issue price remained the same until 2004, when the Westward Journey Jefferson nickels were added for 2 years. At this point, while the face value increased by only 5 cents, the original issue price increased by $6. This price increase did not adversely affect mintage numbers, as from 2003 through 2006, mintage numbers remained over 1 million sets each year.

The 2005 Silver Proof Set contains 11 coins in 2 separate plastic holders. The holder for the regular portion of the set contains the Lincoln Cent, Roosevelt Dime, Kennedy Half Dollar, Sacagawea Dollar, as well as the 2nd year of the Westward Journey Jefferson Nickels. These Jefferson nickels display a new obverse design as well as 2 new reverse designs for the American Buffalo and Ocean in View. The other holder is for the State Quarters series. In 2005, the 5 states represented by the Quarters series are California, Minnesota, Oregon, Kansas, and West Virginia.

Packaging of the Silver Proof Sets had a red background in order to distinguish them from the regular Proof Sets with their blue background.

Please contact our Silver.com Customer Service team with any questions you may have. We can be reached via phone at 888-989-7223, via online live chat, or via our email.