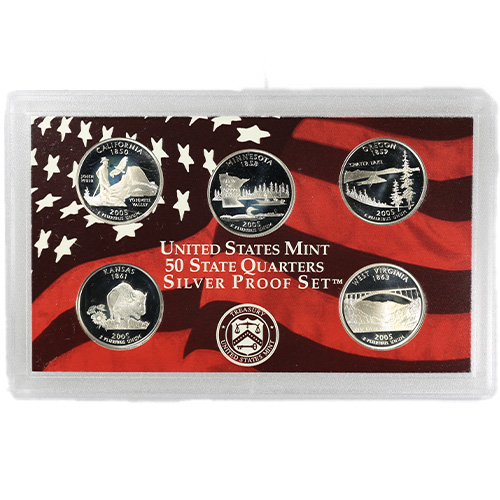 With a new release each year, the United States Mint has taken its Statehood quarters series and turned them into annual release sets. Right now, you can purchase the 2005 Proof Silver US Mint Quarters Set from Silver.com in good condition!

The quarters featured in this set have been made with 90% silver, setting them apart from the regular circulation versions of these same quarters. In addition to their silver content, these coins are different from regular circulation quarters because they were struck with a special proof finish that gives them a mirrorlike appearance.

In 1999, the United States Mint launched the Statehood quarters series. This coin program ran through 2008 with five new quarters released each year. The coins were all released in the same order in which the states were ratified or added to the Union. The states included in the 2005 set include California, Minnesota, Oregon, Kansas, and West Virginia.

The obverse faces of these quarters are all the same. The iconic President George Washington bust that graces the obverse of all circulation quarters can also be found on these Statehood quarters. The reverse designs vary from quarter to quarter. The designs on these quarters are meant to showcase the diversity of the United States. However, there are some common elements in the designs, such as the name of the state, the year it became a state, year of the release, and the phrase “E Pluribus Unum.”

These coin sets are used, but the coins will all still be in good condition. The plastic holders will be included in your order, but they may show signs of wear and tear. Other components of the original packaging, such as the shipping sleeves and Certificates of Authenticity, may or may not be included with your purchase. If you do receive these pieces of packaging, they could show signs of wear and tear.

Please feel free to reach out to our customer service team with any questions or concerns that you may have. You can call us at 888-989-7223, chat with us online, or email us for any assistance.