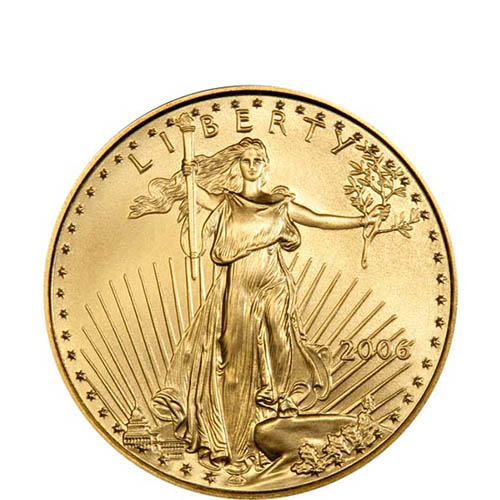 The Gold American Eagle coins are made of a sturdy composition of 22 karat gold. They are comprised of 91.67% gold, 3% silver, and 5.33% copper. The Gold Bullion Coin Act of 1985, which authorized the Gold American Eagle coins, requires that the coins are produced from gold mined in the US. The Act also stipulates that any profit from the sale of these coins be applied towards reducing the national debt.

The obverse of the Gold American Eagle depicts a full-length figure of Lady Liberty walking directly at you. Her hair is flowing in the breeze, her outstretched right hand carrying a torch and her left hand carrying an olive branch. Near the bottom edge of the coin, to the left of her right foot, is a depiction of the Capitol building. This Lady Liberty design was created by Irish-born Augustus Saint-Gaudens, at the request of President Theodore Roosevelt. In 1904, President Roosevelt commissioned Saint-Gaudens to return the beauty to our US coins.

The reverse of the Gold American Eagle depicts a male eagle, carrying an olive branch, flying towards a nest with an eagle family in it. This design was created by Miley Busiek and sculpted by Sherl J. Winter, and is said to symbolize the importance of unity and family tradition in America. It includes several inscriptions as well.

If you should have questions, please contact our Silver.com Customer Service team – we will be happy to assist you. We can be reached via phone at 888-989-7223, via our online live chat, or via our email.