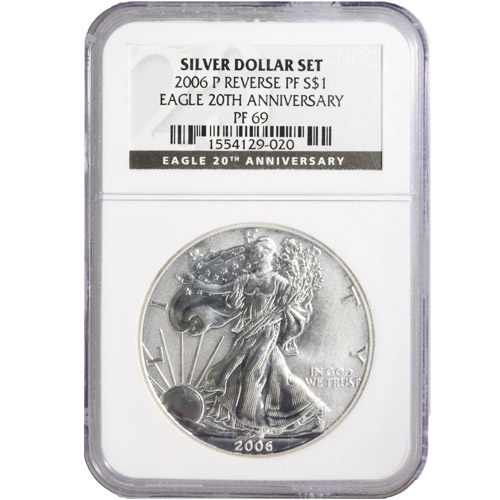 In 2006, the United States Mint celebrated the 20th anniversary of its American Eagle bullion coin program in style. The Silver Eagles were released to intense demand from both investors and collectors. In addition to the two traditional versions of the coin, the US Mint introduced a new annual collectible coin with the Burnished Silver Eagle and struck a celebratory reverse proof coin as well. Today, 2006-P 1 oz Reverse Proof Silver American Eagles are available to you online at Silver.com in near-perfect condition.

All of the 2006-P 1 oz Reverse Proof Silver American Eagles in this product listing comes with a PF69 certification. Considered near-perfect, these coins have full, original mint luster and a maximum of two minor detracting flaws. Examples of acceptable flaws include only minuscule contact marks or hairlines outside of the primary focal points of the coin.

Walking Liberty is depicted on the obverse of the 2006-P 1 oz Reverse Proof Silver Eagle. Designed in 1916 by Adolph A. Weinman, the image shows Liberty walking toward the sun on the horizon draped in the American flag.

The heraldic eagle of the United States is the featured design on the reverse of 2006 1 oz Reverse Proof Silver American Eagles. This iconic emblem of the nation includes a bald eagle with the US national shield, arrows of war, olive branch of peace, and a cluster of 13 stars representing the original colonies.

Please contact Silver.com with your questions. Our team is available on the phone at 888-989-7223, on the web using our live chat, and via our email.