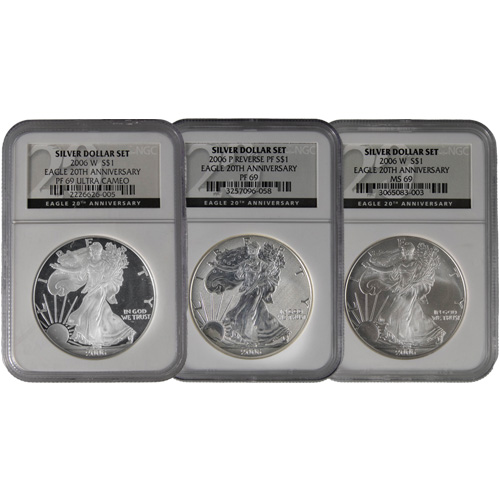 The 2006 release of Silver American Eagles at the United States Mint included a limited-issue, three-coin set. The US Mint introduced a new Burnished Silver Eagle in 2006 and also produced a special Reverse Proof coin to offer alongside the traditional Proof Silver Eagle in a three-coin set. Today, 2006 1 oz Silver American Eagle 3-Coin Sets in near-perfect condition are available to you online at Silver.com.

In 1986, the United States Mint issued the Silver American Eagle for the first time in history. The coins available that year included the 1 oz BU Silver Eagle and the 1 oz Proof Silver Eagle. Until 2006, no other versions of the coin were released. However, 2006 saw the introduction of a new Burnished Silver Eagle coin for annual release and a first-ever Reverse Proof Silver Eagle.

All of these 2006 1 oz Silver American Eagle 3-Coin Sets are available to you for purchase in near-perfect condition. Each coin is individually sealed in a plastic slab. The coins have either Mint State or Proof 69 certifications, an indication that the coins are near-perfect specimens. Coins in this condition have full, original mint luster and no more than two minor detractions. Acceptable flaws at this level include only minuscule contact marks or hairlines outside the primary focal points.

On the obverse of the coins in the 2006 1 oz Silver American Eagle 3-Coin Set is Walking Liberty. Designed by Adolph A. Weinman in 1916, it shows the full-length figure of Liberty in left-profile relief as she walks toward the sun on the horizon.

The reverse side of 2006 Silver American Eagles in this 3-Coin Set depicts the heraldic eagle of the United States. This particular version of the historic eagle shield was created in 1986 by John Mercanti for the Silver Eagle Series.

Please contact Silver.com if you have any questions. Our team can assist you at 888-989-7223, chat with you live online, or respond to inquiries via email.