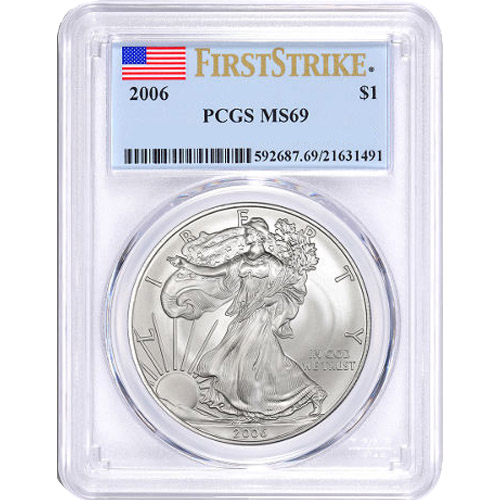 The most popular coin from the United States Mint and one of the most sought-after silver coins in the world is the Silver American Eagle. Introduced in 1986 as the official bullion coin of the US, the Silver Eagle is also made available in two collectible versions in the form of proof and burnished issues. Today, 2006 1 oz Silver American Eagle Coins are available to you online at Silver.com with PCGS certification.

The 2006 issue of the Silver American Eagle coin is the 20th-anniversary release of the nation’s official silver bullion coin. The mintage figures for the bullion and proof versions of the coin hit highs not seen since 1987 in both versions. Though neither was a record, the bullion coin hit what was then a second-best high of 10.676 million and the proof coin hit the same milestone with 1.092 million coins.

All 2006 1 oz Silver American Eagle coins available here have a Mint State 69 certification from the PCGS. Considered near-perfect specimens, these Silver Eagles have full, original mint luster with a maximum of two minor detracting flaws. These flaws are limited in nature to minuscule contact marks or hairlines and limited in scope to those surface areas outside the primary focal points.

Included with your purchase is a First Strike label from the PCGS. This FS label is included in the slab and denotes that the coins were received within 30 days of their 2006 issue date for certification.

On the reverse of the 2006 1 oz Silver Eagle coin is the image of the heraldic eagle of the United States. The eagle is set in the center with the nation’s heraldic shield on its chest. The eagle clutches the olive branch of peace and arrows of war, while an arrangement of 13 stars above its head symbolize the original 13 colonies of America.

The obverse of the 2006 1 oz Silver American Eagle coin includes the Walking Liberty design. Created by Adolph A. Weinman, it depicts Liberty as she strides toward the sun on the horizon with the US flag over her shoulders and a hand outstretched.

Please feel free to reach out to Silver.com with your questions. You can call us at 888-989-7223, chat with us live online, or simply send us an email.