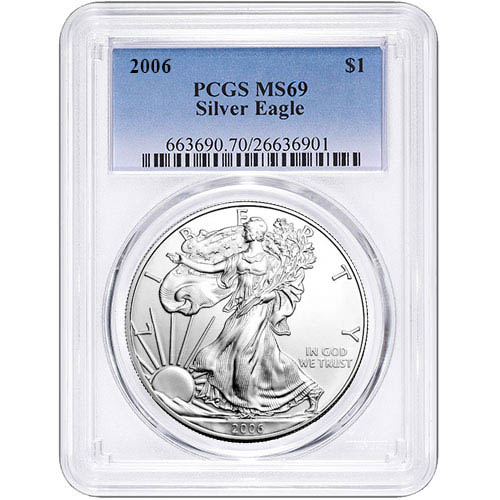 When the Silver Eagle debuted in 1986, it took one year for the program to surpass the 10-million mark in an individual release when the 1987 coin sold 11.44 million coins. It would take another 15 years for the program to cross 10 million again. The 2006 issue was greeted with growing demand that pushed a single-year mintage of 10 million coins for the second time in five years. Today, 2006 1 oz Silver American Eagle Coins are available to you online at Silver.com with a PCGS certification.

All 2006 1 oz Silver American Eagle Coins in this listing comes with Mint State 69 certifications. Coins with this grade have full, original mint luster and no more than two minor detracting flaws. Examples of acceptable flaws at this grade level include only minuscule contact marks or hairlines found outside the primary focal points.

On the obverse side of 2006 Silver American Eagle coins is the image of Walking Liberty. This stunning design comes from the circulation half-dollar coin issued between 1916 and 1947 and was designed by Adolph A. Weinman.

The reverse face of 2006 1 oz Silver American Eagle coins includes the heraldic eagle of the United States. This particular version of the seal was modified in 1986 to modernize its appearance, with the work completed by John Mercanti.

Please reach out to Silver.com if you have any questions when buying silver. You can call us at 888-989-7223, chat with us live online, or email us directly.