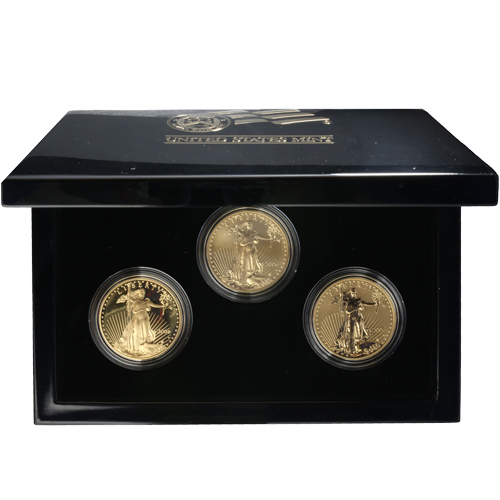 The 2006 release of the Gold Eagles from the United States Mint included a new annual collectible coin and a special three-coin set to mark 20 years of availability for the Gold American Eagle Series. This set includes three different collectible coins with an overall mintage for the set below 10,000 in total. Right now, 2006 20th Anniversary Gold American Eagle 3-Coin Sets are available to purchase online at Silver.com.

This three-coin set features the traditional W-Proof Gold Eagle the United States Mint has issued annually since 1986. The other two coins are unique, with one still issued annually and the other issued just for this set. The W-Burnished Gold Eagle debuted in 2006 and boasts matte visual elements. This coin remains in production each year by the mint. There is also a W-Reverse Proof Gold Eagle that was produced just for this 20th-anniversary set. It boasts mirrored design elements and frosted background fields.

Lady Liberty is featured on the obverse of all 2006 20th Anniversary Gold American Eagles in this three-coin set. Designed in 1907 by Augustus Saint-Gaudens, this front-facing bust of Liberty depicts the US Capitol Building at her feet as she strides forward with rays of sunshine framing her figure from behind. A ring of 50 stars around the design represents the individual states of the United States of America.

A family of American bald eagles is depicted on the reverse of each 2006 20th Anniversary Gold American Eagle in the three-coin set. This image was created exclusively for this series in 1986 by Miley Busiek. In this design element, you will find a male eagle flying over the family nest as a female eagle guards over a young hatchling within.

Each one of the coins in this three-coin set has a “W” mint mark from the West Point Mint. The coins in the Gold Eagle Series have 22-karat gold content, which consists of 91.67% gold, 5.33% copper, and 3% silver.