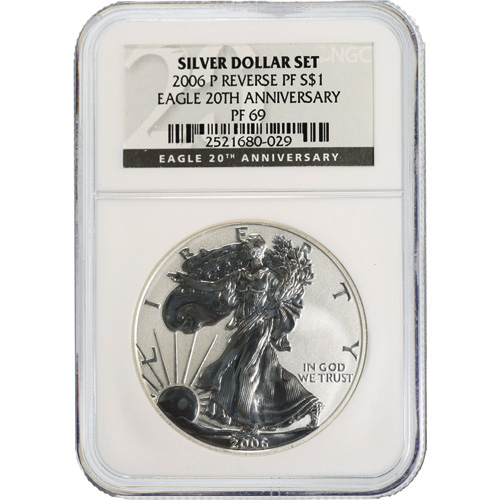 The Silver American Eagle has been issued by the United States Mint since 1986. The coins are typically offered in BU and Proof condition, with a Burnished coin also available as of 2006. Reverse Proof coins are relatively rare in the series, with just six of these issues released as of 2021. Now, certified near-perfect 2006-P 1 oz Reverse Proof Silver American Eagles from the 20th Anniversary are available to you for purchase online at Silver.com.

The 2006 release of Silver American Eagles marked the 20th anniversary of the series. Two important coins were issued this year alongside the traditional W-Proof Silver Eagle and the BU Silver Eagle. One of these coins was the all-new Burnished Silver Eagle, a coin that has been issued every year since 2006, with the exception of 2009 and 2010.

A Reverse Proof Silver Eagle was the other unique release in 2006. This special version of the Silver Eagle was struck as part of the anniversary celebration and marked the first-ever option of its kind in the series. The Reverse Proof coins were available for individual purchase and offered in a limited-edition three-coin set that included a P-Reverse Proof, W-Proof, and W-Burnished coin.

Walking Liberty is found on the obverse of 2006-P 1 oz Reverse Proof Silver American Eagles. This design was created in 1916 by Adolph A. Weinman and first featured on US coins with the half dollar issued between 1916 and 1947. The design shows the full-length figure of Liberty in left-profile relief as she walks across the field of the coin toward the sun on the horizon.

The heraldic eagle of the United States of America is on the reverse side of 2006-P 1 oz Silver American Eagles. This design was modified in 1986 for the series by John Mercanti and shows a powerful bald eagle in front-facing relief. The eagle is shown clutching the arrows of war and the olive branch of peace in its talons. The US national shield is supported on its chest.

These 2006-P 1 oz Reverse Proof Silver American Eagles are available in near-perfect condition. PF69 coins showcase full, original mint luster and a maximum of two minor detractions. Examples of those detractions include only minuscule contact marks or hairlines that must be located outside the primary fields of the coin. As a reverse proof, these coins come with mirrored designs and frosted backgrounds.