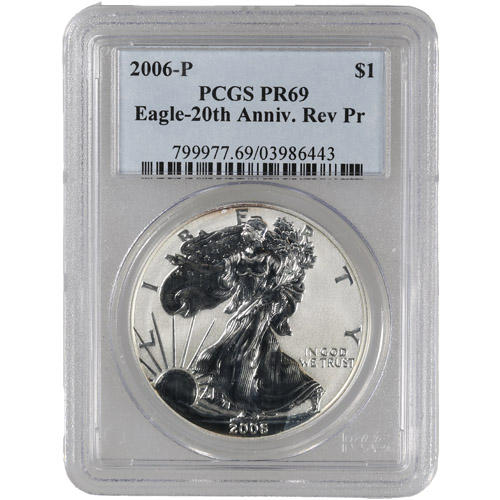 Each 2006-P 1 oz Reverse Proof Silver American Eagle available here comes with a near-perfect grade. The PCGS issues a PR69 grade to coins that exhibit full, original mint luster and two minor detracting flaws, at the most. These flaws are limited in nature to minuscule contact marks or hairlines and must be located outside the primary focal points of the coin.

The obverse side of 2006-P 1 oz Reverse Proof Silver Eagles depicts Walking Liberty. Designed in 1916 by Adolph A. Weinman, the visual comes with Liberty in left-profile relief as she walks toward the sun on the horizon. Her right hand is reaching out toward the sun on the horizon while her left carries branches of oak and laurel, symbols of America’s civic and military prowess.

On the reverse face of the 2006-P Reverse Proof Silver Eagle is the heraldic eagle design from John Mercanti. First designed in 1794, this modernized version of the design comes with a powerful bald eagle in support of the US national shield. The eagle clutches an olive branch of peace and the arrows of war in its talons with a triangular cluster of 13 stars over its head.

If you have questions, Silver.com customer service will be happy to assist. You can call us on the phone at 888-989-7223, chat with us live online, or simply send us an email with your inquiries.