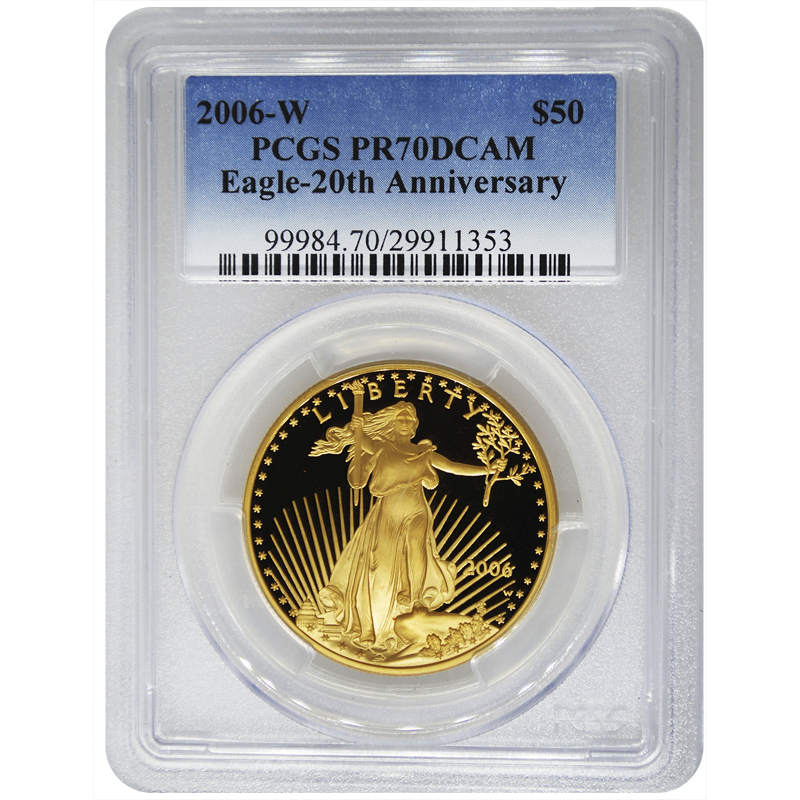 In 2006, the United States Mint celebrated a milestone for the nation’s official gold bullion coin program. Introduced in 1986, the Gold American Eagle coin reached its 20th anniversary in 2006, and the US Mint celebrated with multiple versions of one of the world’s most popular coins. Today you have the chance to purchase a 2006-W 1 oz Proof Gold American Eagle from Silver.com in perfect condition.

The United States Mint produced all four weights in the proof and bullion version of the Gold American Eagle in 2006, along with some special additions and a one-time striking of other coins. For starters, the Mint unveiled the all-new Burnished Gold American Eagle coin, as well as a 20th Anniversary Reverse Proof coin.

Augustus Saint-Gaudens’ original Lady Liberty image was resurrected for use on the Gold American Eagle when it was introduced in 1986. His image features Liberty marching forward to the future, her silhouette outlined by the setting sun in the background. This image appears on the obverse side of all Gold American Eagle coins.

The obverse of all Gold American Eagles bears the depiction of a family of nesting bald eagles. Sculptor Miley Busiek was tasked with creating an image for these coins, and her creation does not appear on any coin other than the Gold American Eagle.

Each of the 2006-W 1 oz Proof Gold American Eagles in this Silver.com listing has a perfect grade of PR70. Coins in this condition have their full, original luster, and no detracting marks. Deep-cameo is a term that defines a coin with a strong, frosted design set that appears to float above a deeply-mirrored, clear background field.

If you have any questions about these coins from the United States Mint, a Silver.com associate will be happy to help. You can reach out to us on the phone at 888-989-7223, connect with us online through our live web chat, or send us an email with your questions. If you are looking for similar products, be sure to visit our Gold American Eagles page.