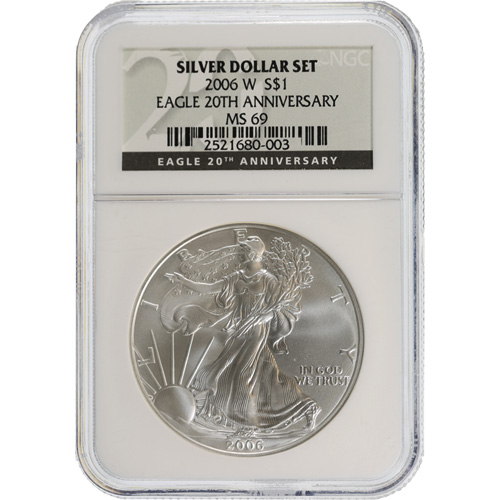 The Burnished Silver Eagle is now an established coin within the annual release of Silver American Eagles at the United States Mint. However, in 2006 this version of the coin was making its debut as the US Mint celebrated the 20th anniversary of the series as a whole. Now, 2006-W 1 oz Burnished Silver American Eagles are available to you for purchase online at Silver.com in near-perfect condition.

The obverse side of the 2006-W Burnished Silver Eagle Coin comes with the popular image of Walking Liberty. First used on the half dollar from 1916 to 1947, the Walking Liberty design captures her image in a full-length figure with a left-profile relief view. She is shown walking toward the sun on the horizon with the American flag draped around her figure, her right hand outstretched, and her left hand carrying branches of oak and laurel.

On the reverse field of 2006-W 1 oz Burnished Silver American Eagles is an image of the heraldic eagle of the United States of America. This powerful bald eagle is set in front-facing relief with the US National Shield on its chest, the arrows of war in one talon, and the olive branch of peace in the other. There is a triangular cluster of 13 stars over the head of the eagle.

These 2006-W 1 oz Burnished Silver American Eagles are available to purchase in near-perfect condition. Coins with a Mint State 69 certification showcase full, original mint luster with no more than two minor detracting flaws present. These flaws are limited to the areas outside of the primary focal fields and cannot exceed minuscule contact marks or hairlines in nature.