2006 has proven to be the most memorable year in the 30-year history of the Silver American Eagle coin program. The 20th anniversary of the coin’s introduction, the United States Mint celebrated with an expansion of the program and one-time striking of special reverse-proof specimen. Right now, the 2006-W Proof Silver American Eagle is available for purchase on Silver.com as a perfect specimen.

The United States Mint celebrated the 20th anniversary of the American Eagle coin series in style. Both the gold and silver versions of the coin had a new option introduced with the burnished American Eagle coin, a special proof that is delicately crafted by the US Mint.

Mintage of the coins surged in 2006 as a result of the demand for 20th anniversary options. The bullion coin jumped from 8.89 million 2005 to 10.6 million, the second-highest total to date in the program’s history. The 2006 Proof Silver American Eagle reached a high not seen since 1986, with more than one million coins struck.

The US Mint also released its new burnished Silver American Eagle, with a mintage of 466,573 coins. There were also 248,875 reverse proof Silver American Eagles struck in 2006 by the Philadelphia Mint for use in a 20th Anniversary Silver Eagle Set. A maximum mintage of 250,000 sets was established, with sales just missing the sellout mark. The overall price of silver throughout the year was extremely high, averaging $11.54 per ounce.

Each coin listed here is a perfect PR70 specimen from the PCGS, indicating the presence of full, original mint luster and no detracting flaws. DCAM refers to the strong, frosted finish of the design set and deeply-mirrored, clear background field of the coins. 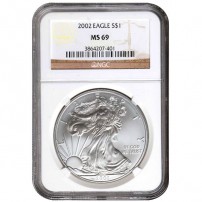