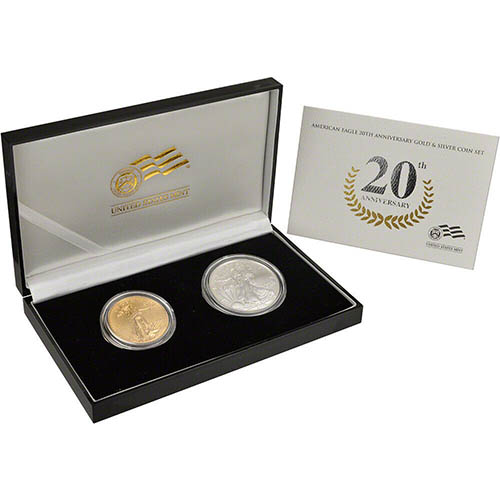 All 2006-W Burnished American Eagle 20th Anniversary 2-Coin Sets are available to you with a commemorative display box to house the two coins and feature a Certificate of Authenticity from the United States Mint. The burnished coins are specially handled by the US Mint during production with each coin removed by hand from the burnishing drum and struck individually, then removed and packaged immediately by gloved hands.

On the obverse of 2006-W Burnished Silver Eagles is the image of Walking Liberty by Adolph A. Weinman. The reverse of the Silver Eagle includes John Mercanti’s heraldic eagle of the United States.

The obverse of 2006-W Burnished Gold Eagles features the design of Liberty created in 1907 by Augustus Saint-Gaudens for the $20 Gold Double Eagle. On the reverse of the coins is Miley Busiek’s depiction of a family of American bald eagles.

All Burnished American Eagle Coins in this set were produced by the West Point Mint with “W” mint marks. The marks are found on the reverse of Silver Eagles and obverse of Gold Eagles.

Please feel free to reach out to Silver.com with any questions. You can call us on the phone at 888-989-7223, online using our live chat, and via our email address.