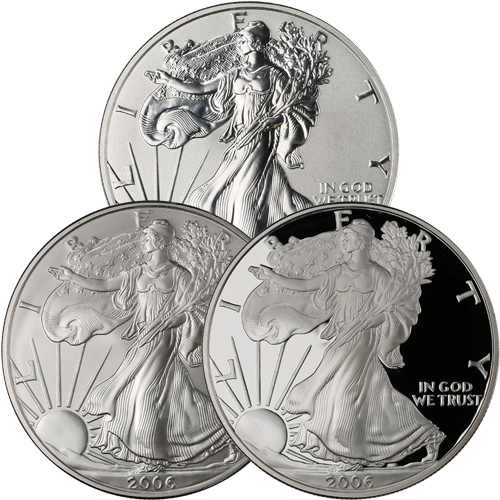 The year 2006 has proven to be the most memorable year in the 30-year history of the Silver American Eagle coin program. The 20th anniversary of the coin’s introduction, the United States Mint celebrated with an expansion of the program and one-time striking of special reverse-proof specimen. Right now those coins are available together in the 2006-W Proof Silver American Eagle 3-Coin Set online at Silver.com.

The United States Mint celebrated the 20th anniversary of the American Eagle coin series in style. Both the gold and silver versions of the coin had a new option introduced with the burnished American Eagle coin, a special proof that is delicately crafted by the US Mint.

Mintage of the coins surged in 2006 as a result of the demand for 20th anniversary options. The bullion coin jumped from 8.89 million 2005 to 10.6 million, the second-highest total to date in the program’s history.

A reverse proof silver coin has the opposite visual effects of a typical proof in the American Silver Eagle series. You’ll find a strong, frosted background field on this coin, with deeply-mirrored, raised design features.

Finally, the all-new Burnished Silver American Eagle was made available for this three-coin set. All of these coins were available separately for purchase from the United States Mint, as well as together in this beautiful collector’s set with a presentation box and Certificate of Authenticity from the US Mint.

On the obverse is the timeless Walking Liberty image from Adolph A. Weinman, as originally used on the Walking Liberty Half Dollar from 1916 to 1947. The heraldic eagle of the United States has featured on countless coins, crests, and seals dating back to 1794. This depiction is a modern version from then-US Mint Chief Engraver John Mercanti, who created it in 1986.

If you have any questions, please feel free to ask. Silver.com customer service is available at 888-989-7223, online using our live chat, and via our email address. Don’t forget to check the silver prices today online at our website!