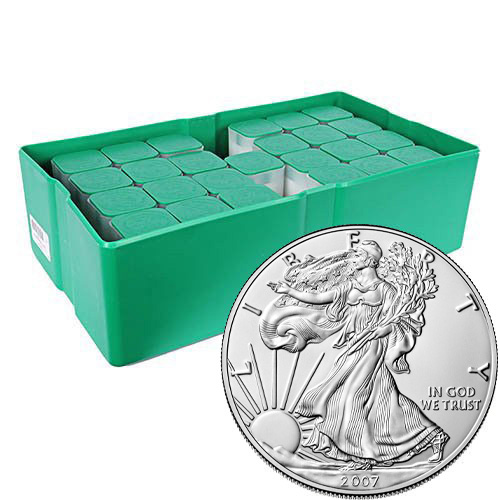 The Silver American Eagle Series debuted from the United States Mint in 1986. The series serves as the official bullion collection for the United States. Introduced in Brilliant Uncirculated and Proof versions that year, the 2006 release saw the introduction of a third version of the coin with a Burnished option. The highest-minted coin in the series is the BU version, an investment-grade coin offered annually by law. Now, 2007 Silver American Eagle Monster Boxes are available to you for purchase online at Silver.com.

When the United States Mint issues the BU Silver Eagles each year, the coins leave the mint inside of large, green boxes known as Monster Boxes. The Monster Box holds a total of 500 coins housed in 25 separate tubes. The tubes hold a total of 20 coins each. The entire package is secured, originally, with a white strap holding on the green lid. Each tube inside is capped by a green lid.

The obverse side of 2007 Silver American Eagles features the Walking Liberty design from Adolph A. Weinman. This image originally appeared on the obverse of the US Half Dollar coin from 1916 to 1947. It depicts Liberty in left-profile relief marching toward the sun on the horizon.

On the reverse field of the 2007 Silver Eagles is a modern version of the heraldic eagle of the United States. The design was created in 1986 by John Mercanti and is based on the oldest design in American coining history, one created in 1792 by Robert Scot. It depicts the American bald eagle supporting the US national shield with the arrows of war, the olive branch of peace, and the 13 stars representative of the original colonies.

2007 Silver American Eagles in this listing ship inside of the original United States Mint Monster Box. Inside, there are a total 500 individual 2007 Silver Eagles. As mentioned above, the coins are dispersed in 20s across the 25 individual tubes inside the box.

Silver.com customer service is available to you at 888-989-7223. We are also available to assist you online through our live chat and email address features.