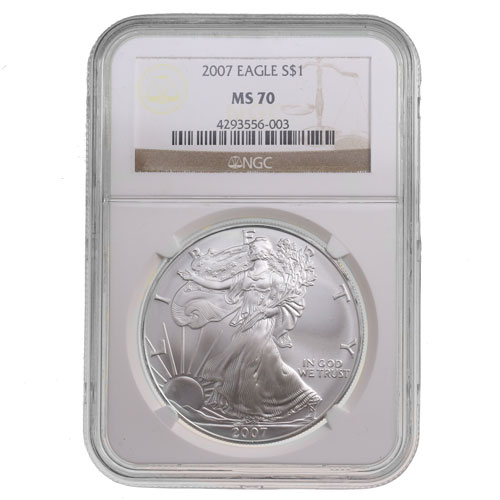 Silver American Eagle coins were first introduced in 1986 in both bullion and proof versions. While the proof coins have sharper rims and more intricate design features, the bullion version is the preferred coin of investors.

Each of the 2007 Silver American Eagle coins in this Silver.com product listing has a perfect Mint State 70 grade from the NGC. A perfect bullion coin has its full, original mint luster, and no detracting flaws of any kind.

On the obverse face of each coin is the image of Walking Liberty. Created by Adolph A. Weinman in 1916, this image originally appeared on the Walking Liberty Half Dollar coin from the US Mint from 1916 to 1947. His depiction features Lady Liberty striding toward the setting sun, with the American flag draped over her shoulders. It is symbolic of America’s march toward a brighter future.

The reverse side of the coin was designed by US Mint Chief Engraver John Mercanti. His design includes the bald eagle set behind a heraldic shield. Above the eagle is the triangular design of 13 stars, representing the original American colonies. The coin’s weight, purity, metal content, and face value are included on this side.

The United States Mint was founded in 1792 by the Currency Act of 1792. Today, it consists of four major minting facilities in San Francisco, Denver, Philadelphia, and West Point. Most Silver American Eagles are produced at the West Point Mint.

If you have questions, please feel free to reach out to Silver.com at 888-989-7223. We’re also conveniently available online through our website’s live chat feature or via email. If you want to look at similar products, visit our Silver Dollars page.