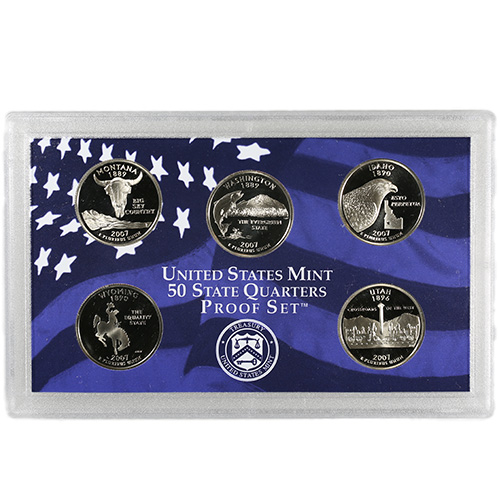 The State Quarters Program served as the basis for the future release of the America the Beautiful Series. The coins were issued for circulation, with limited proof sets also available that were struck on the circulation US quarter blanks. Now, 2007 US Mint Proof Quarter Sets are available to you for purchase online from Silver.com.

In 1999, the United States Mint introduced a coin program for circulation use that would go on to inspire a silver bullion series. The State Quarters Program issued five designs per year for a total of 50 coins. Each state in the Union was represented, with the designs issued in the order of each state’s admission to the Union.

Following the massive success of the series, two further collections were issued. In 2009, the DC and Territories Quarter Program celebrated Washington D.C. and the nation’s five overseas territories. In 2010, the US Mint introduced the 5 oz silver bullion coins in the America the Beautiful Series with fresh designs for each of the 56 jurisdictions of the United States of America.

The obverse of 2007 US Mint Proof Quarter Sets comes with a portrait of President George Washington, the first President of the United States of America. This design was created in 1932 by John Flanagan for the US quarter and was created in honor of the president’s 200th birthday. On the reverse field of quarters in the 2007 US Mint Proof Quarter Sets are designs honoring each of the individual states celebrated this year. Montana, Washington, Idaho, Wyoming, and Utah all joined the Union between 1889 and 1896, and were the last states admitted in the 19th century.

These 2007 US Mint Proof Quarter Sets come with protective plastic holders and the potential for outer shippers. The coins remain in good condition and are all sealed together in the plastic holder. The coins are proof specimens with frosted designs and mirrored fields.