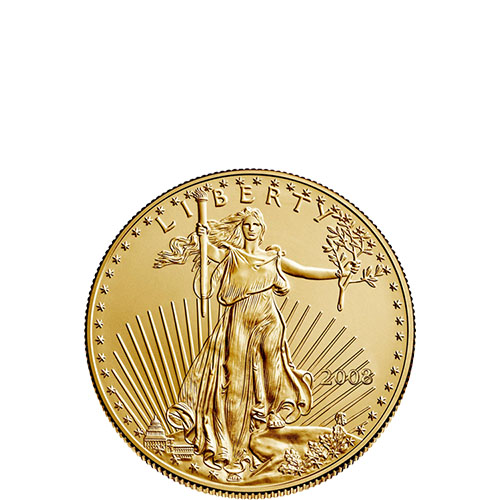 Global economies were in the midst of some turbulent times in 2008. This had a significant impact on the production and sales of the Gold American Eagle coins. Sales of the coins during the first six months of 2008 were quite similar to previous years for the same time period. Mid-year that changed, however. July marked the start of a dramatic increase in sales, so much so that the US Mint was forced to suspend gold coin sales in August for a two-week period. When sales did resume, coins were rationed. Despite the suspension of sales and the subsequent rationing, the total number of Gold American Eagle coins sold in 2008 puts it in the top ten highest sales years. Right now, a 2008 1/4 oz Gold American Eagle coin is available for purchase from Silver.com.

President Theodore Roosevelt felt that the US coinage had become artistically unseemly. In 1904, he inquired into the possibility of retaining the talents of Augustus Saint-Gaudens to create a new design that would return the US coins to a condition of beauty. Saint-Gaudens had studied sculpture at a world-renowned fine-arts school in Paris, having been one of the first Americans to do so. Saint-Gaudens accepted the President’s invitation, and it is a version of Saint-Gaudens’ Liberty design that now appears on the Gold American Eagle coin.

The obverse of the 2008 Gold American Eagle coin depicts the full length figure of Lady Liberty, as created by Augustus Saint-Gaudens. Lady Liberty appears to be walking right off the coin. Her hair is flowing in the breeze behind her, as she carries a torch in her outstretched right arm and an olive branch in her left hand.

The reverse of the 2008 Gold American Eagle coin features a design that depicts the importance of unity and family in America. This design was created by Miley Busiek and sculpted by Sherl J. Winter. A male eagle, carrying an olive branch in its claws, is flying towards a nest with a female eagle and a couple of eaglets. It includes several inscriptions as well.

If you have any questions, our Silver.com Customer Service team is available to assist you. We can be reached via phone at 888-989-7223, via our online live chat, or via our email address.