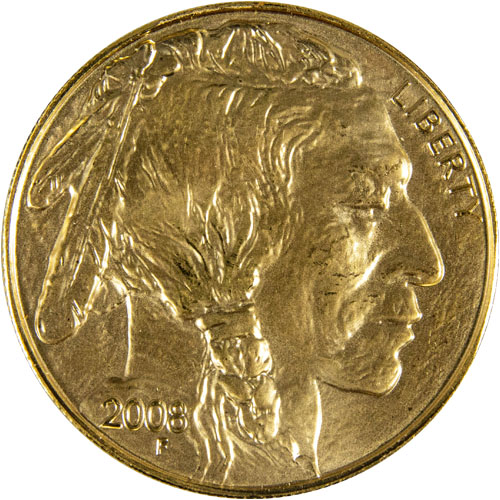 This year marks the third year of the Gold American Buffalo coin series. It’s also the first year that the US Mint produced Proof and Uncirculated collector versions of the Gold Buffalos, in 4 different weights. The bullion coins, offered only in one ounce size, are investment-grade coins due to their weight, content, and purity guaranteed by the US government. They are also the first coins the US Mint has produced in .9999 pure gold. All Gold Buffalo coins are struck at the West Point Mint, but only the Proof coins bear the W mint mark. Right now, Silver.com has the 2008 1 oz Gold American Buffalo coin available for purchase.

The price of gold surpassed the $1,000.00 per ounce threshold for the first time ever ($1,023.50) in 2008, however, the price of gold fell to finish the year at $865.00 per ounce. This closing price was only a 3.4% increase over the previous year, and was the smallest increase since 2001. The 2008 bullion Gold Buffalo coin sales exceeded 2007 sales by roughly 53,000 coins. Sales were strong throughout 2008, but a surge in demand in September forced the US Mint to suspend sales for more than one month. The Mint resumed taking orders in November until the inventory was gone.

The obverse of the Gold American Buffalo features the profile of a Native American Chief that is actually believed to be the composite of 3 Chiefs:  Chief Iron Tail of the Oglala Lakota, Chief John Big Tree of the Kiowa, and Chief Two Moons of the Cheyenne. This design was originally created for the Indian Head or Buffalo Nickel by James Earle Fraser, and collectors know it as Fraser’s 1913, Type I design. It was chosen to appear again on the Gold Buffalo because it is thought to be among the best designs of any US coin.

The Gold American Buffalo coin series was created as a result of the Presidential $1 Coin Act of 2005. It mandated the production of the US government’s first one ounce .9999 pure gold bullion coin. Many investors preferred .9999 pure gold coins. Since Canada, China, and other countries already had 24 karat gold coin offerings, it was felt that the US needed its own to keep pace with them.

Please contact our Silver.com Customer Service team if you have any questions when you buy gold online – we will gladly assist you. We can be reached via phone at 888-989-7223, via our online live chat, or via our email.