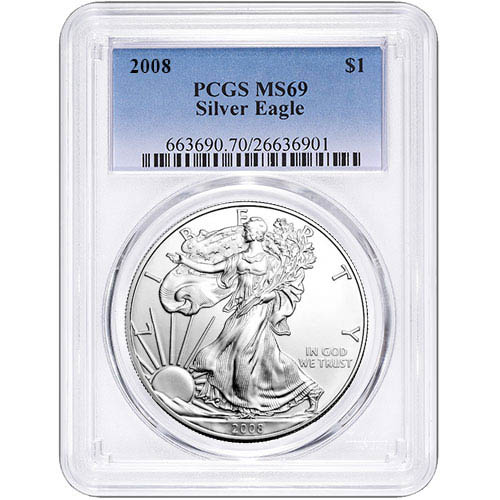 Although recent purchasers of the Silver American Eagle are accustomed to seeing the silver bullion program break sales records on a near-annual basis, the first two decades of the series saw a record from 1987 stand uncontested over more than 20 years. In 2008, that record finally fell and set the stage for several more records in the years to come. Right now, 2008 1 oz Silver American Eagle Coins are available to purchase online at Silver.com in near-perfect condition.

Each 2008 1 oz Silver American Eagle Coin in this listing is available in near-perfect condition according to the PCGS. The Mint State 69 indicates the coins exhibit full, original mint luster and a maximum of two minor detracting flaws. Those flaws are limited in nature to minuscule contact marks or hairlines and limited in scope to the areas outside of the primary focal points of the coin.

For the first time since 1987, the Silver American Eagle coin had a new mintage record in 2008. The competition wasn’t even close either as the 2008 Silver Eagle nearly doubled the previous record of 11.44 million coins with a total mintage of 20,583,000. This was the first release in a four-year stretch in which the demand for Silver Eagles soared to new heights each year.

On the obverse of the 2008 1 oz Silver American Eagle Coin is the image of Walking Liberty. Created in 1916 by Adolph A. Weinman, the design captures Liberty in left-profile relief as she walks toward the sun on the horizon. She wears the American flag over her shoulders and holds the oak and laurel branches of military and civic success in her left hand.

After jumping significantly in the previous two years, the price of silver stabilized temporarily in 2008. The average price for the year remained in the $13 range at $13.28 per ounce.

If you have any questions, please call Silver.com. Our customer service team is available to you at 888-989-7223, or you can reach out to us online through our live chat and email address features.