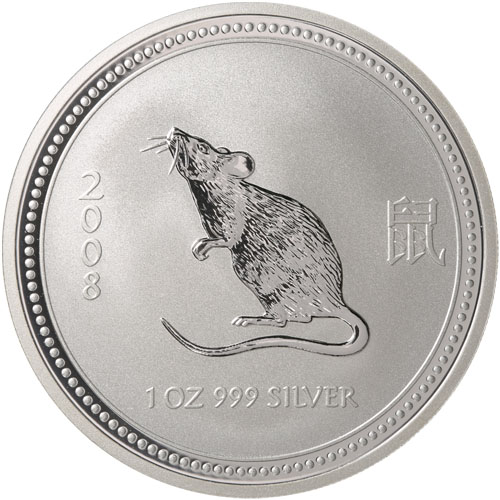 Each 2008 1 oz Silver Australian Lunar Rat Coin available for purchase here today at Silver.com comes with a protective plastic capsule to house the coin. The 1 oz silver bullion coins in the Lunar Series I are the only option among the six options available with each design that has a mintage cap. Only 300,000 of these coins were produced back in 2008 and no more were issued after the calendar year ended.

The rat and ox are first and second, respectively, in the Lunar Calendar’s order because of their arrival to the meeting called by the Jade Emperor. Seeking animals to be his personal guardians, the Jade Emperor called a meeting and the rat was the first to set out to meet him. His progress halted by a river he couldn’t cross alone, the rat cleverly jumped on an ox as it was crossing the river and then jumped off to arrive first as the duo met the Jade Emperor.

On the reverse of 2008 1 oz Silver Australian Lunar Rat Coins, you’ll find the image of two rats in a patch of straw with two pumpkins behind them. The design field includes the Chinese symbol for a rat, the Perth Mint “P” mint mark, and the phrase “Year of the Mouse.”

The obverse of 2008 Silver Australian Lunar Rat Coins includes the image of Queen Elizabeth II. This right-profile portrait is the fourth-generation design from the Royal Mint of England and was designed by Ian Rank-Broadley in 1998. This is the fifth effigy of Her Majesty to feature on Australian coinage during her reign.