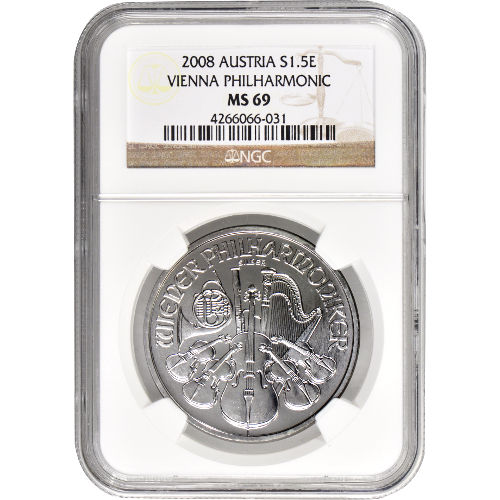 The Silver Austrian Philharmonic coin is one of the newest sovereign silver coins, but that hasn’t stopped it from becoming one of the most popular coins among investors and collectors in mainland Europe. Produced by the Austrian Mint, it is considered legal tender in Austria and is the official silver bullion coin of the nation. Today, the first-edition 2008 1 oz Silver Austrian Philharmonic Coin is available from Silver.com.

Austria’s official silver bullion coin pays homage to the nation’s historic Vienna Philharmonic Orchestra. The group first performed in 1842, making it one of the oldest active orchestras in the world. Based at the Musikverein Golden Hall in Innere Stadt, a borough of the capital city of Vienna, the orchestra is an immense source of national pride.

Each of the coins available for purchase in this product listing is a near-perfect coin. These 2008 1 oz Silver Austrian Philharmonic coins have their full, original luster, and no more than two minor detracting flaws or contact marks. The coins in this listing come from the very first year of production for silver coins in the Austrian Philharmonic series.

On the obverse side of each is the image of the pipe organ from inside the Musikverein. Engravings on this side are in German, but translate into English as “Republic of Austria” and “1 Ounce Fine Silver.”

The reverse side of the coin features a collection of the musical instruments used by members of the orchestra. Included in the image are representations of the harp, violin, cello, flute, bassoon, and French horn. Again, engravings are in German, and read “Vienna Philharmonic” and “Silver” when translated to English.

All Silver Austrian Philharmonic coins are produced at the Austrian Mint. Founded in 1194 by Duke Leopold V, it is one of the oldest operating facilities in Europe. Please direct any questions you have regarding these projects to a Silver.com associate at 888-989-7223, online through our live chat, or via email. If you are interested in similar coins, be sure to see our full selection of Austrian Silver Philharmonic Coins.