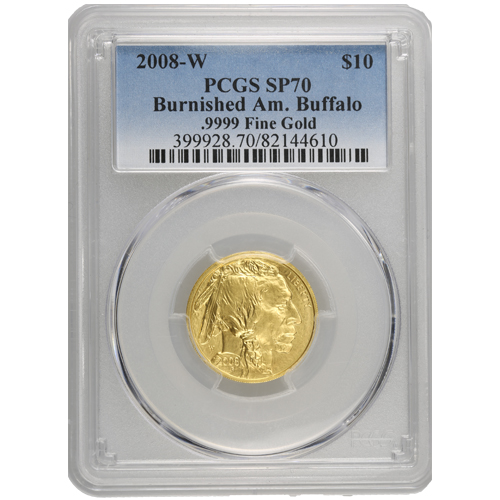 James Earle Fraser was a popular artists and sculptor in the United States during the first two decades of the 20th century. He had completed many private works of art before the United States Mint tasked him with redesigning the appearance of the nation’s five-cent piece. His iconic Buffalo Nickel design is alive today on the nation’s first-ever 24-karat gold coin. The 2008-W ¼ oz Burnished Gold American Buffalo Coin is available online today at Silver.com.

Fraser was a native of Winona, Minnesota, and he grew up on the northern plains of the US, following around his father and working with him. His Buffalo Nickel depiction included images of a Native American chieftain that was created through the combination of facial features from real-world tribal leaders of his day. The other image includes that of a bison, inspired by a real-life resident of the Central Park Zoo.

On the reverse of the 2008-W ¼ oz Burnished Gold American Buffalo is the image of Black Diamond, a powerful and massive bison that called New York City’s Central Park Zoo home in the early 20th century.

The obverse of all 2008-W ¼ oz Burnished Gold American Buffalo Coins includes the right-profile portrait of a Native American chieftain. Though not the depiction of one particular individual, Fraser did use the facial features of three real-world Native leaders of the day to come up with his portrait.

All 2008-W ¼ oz Burnished Gold American Buffalo Coins in this offering are unique Specimen Proof 70 coins according to the PCGS. Considered perfect coins with full, original mint luster and no detracting flaws, specimen is a rarely issued grade referring to coins that are specially struck and uniquely handled, with a distinctive finish similar to proof coins but still unique compared to their collectible proof counterparts.

We encourage all Silver.com customers to reach out to us with questions. Our team members are available on the phone at 888-989-7223, on the web using our live chat, and at our email address.