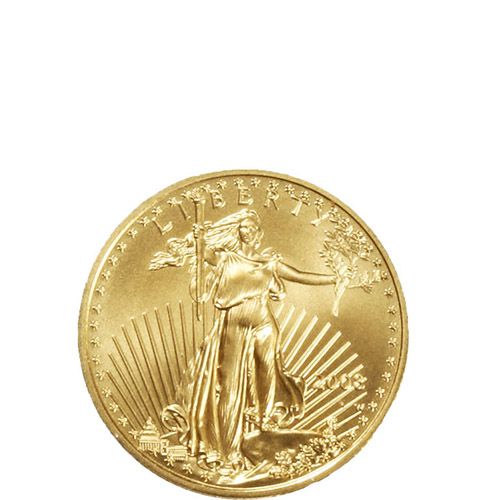 All of the 2008-W 1/4 oz Burnished Gold American Eagles in this product listing are available to you for purchase today with a commemorative box to house the coin and a Certificate of Authenticity from the US Mint. Each coin bears a “W” mint mark from the West Point Mint on the obverse field within the rays of sunshine around Liberty’s figure.

Lady Liberty is depicted on the obverse of the 2008-W 1/4 oz Burnished Gold American Eagles in a design from 1907. Augustus Saint-Gaudens created this design at the behest of President Theodore Roosevelt as part of a larger push to redesign all American coinage in the early 20th century. In the design, Liberty is shown in front-facing relief with a torch in her right hand, an olive branch in her left, and a ring of 50 stars around the design field.

American bald eagles are featured in a family unit on the reverse of 2008-W 1/4 oz Burnished Gold Eagles. This design came from Miley Busiek in 1986 and is exclusive to this series. The design shows a male eagle flying over the family nest with a female eagle guarding the young hatchling within.

Please feel free to reach out to Silver.com with any questions. We are available on the phone at 888-989-7223, online through our live chat, and via our email address.