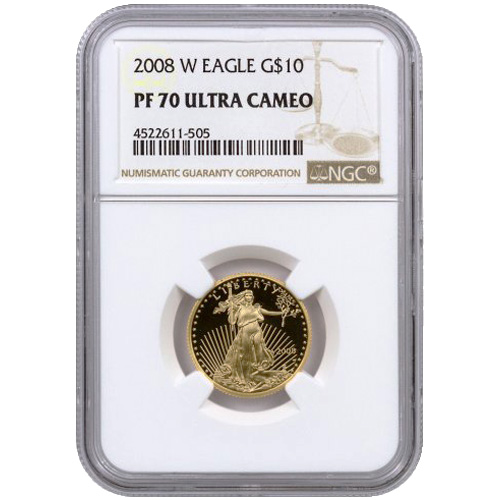 Accustomed to garnering intense demand among the four Proof Gold Eagle options, the 1/4 oz Proof Gold American Eagle coin had the lowest mintage figure in 2008 among the coins and fell to its lowest mark ever to this point in its availability. Only the 1/10 oz coin fell further in demand in 2008 than the 1/4 oz. the 2008 1/4 oz Proof Gold American Eagle Coin is currently available to you for purchase online at Silver.com with a perfect certification.

The 2008 1/4 oz Proof Gold American Eagle had the lowest mintage figure among the four coins in the collection. From its 1988 introduction until 2005, the 1/4 oz coin had the second-highest mintage in every year but two. Though its fall to the bottom of the heap in 2008 would not last, the 1/4 oz coin never reemerged as the second choice behind the 1/10 oz coin.

Mintage of the 2008 1/4 oz Proof Gold American Eagle coins fell a total of 27,312 coins from the previous issue. This was the second-largest drop in 2008 behind only the 1/10 oz coin, and the 1/4 oz Proof Gold Eagles would remain behind the 1/10 oz and 1 oz gold coins for the foreseeable future.