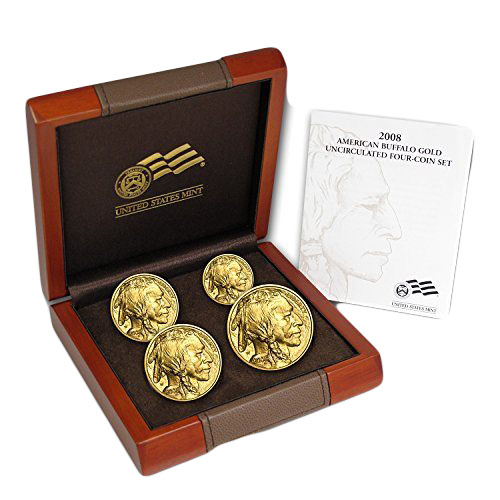 The 2008 issue year was a remarkable one for the United States Mint. Among the gold for sale in its catalog, the newly arrived Gold American Buffalo enjoyed a significant increase in variety with the introduction of an uncirculated collectible coin and two different four-coin sets. Today, the 2008-W Four-Coin Gold American Buffalo Set is available to you online at Silver.com.

Gold American Buffalo coins debuted from the United States Mint in 2006 as the first-ever 24-karat gold coins from the United States. The coins were originally available only in 1 oz of pure gold in bullion and proof versions. In 2008, the popularity of the new coins and rising demand for gold led the mint to introduce an uncirculated version.

This 2008-W Four-Coin Gold American Buffalo Set includes four of the 2008 uncirculated coins, each one in BU condition. Another rarity for the 2008 year was the issuance of fractional-weight coins in the Gold Buffalo Series. In total, this four-coin set includes a 1 oz, ½ oz, ¼ oz, and 1/10 oz Gold Buffalo coin from 2008. A Certificate of Authenticity is included with your purchase.

On the obverse of all 2008-W Gold American Buffalo Coins in this listing is the right-profile portrait of an American Indian leader. This design is said to be a combination of the features from Big Tree, Iron Tail, and Two Moons, each of whom posed as models for Fraser to sketch before the 1913 release of the Buffalo Nickel.

The reverse of all Gold American Buffalo Coins in this 2008-W Four-Coin Set features an American bison standing atop a small mound of dirt. This side of the coin includes engravings of “United States of America,” “E Pluribus Unum,” “In God We Trust,” “$50,” and “1 oz .9999 Fine Gold.”

The 2008-W Four-Coin Gold American Buffalo Set was only issued in 2008. After the 2008 issue year, the US Mint halted for good the release of uncirculated coins and would also discontinue striking of fractional-weight coins in the Gold Buffalo series.