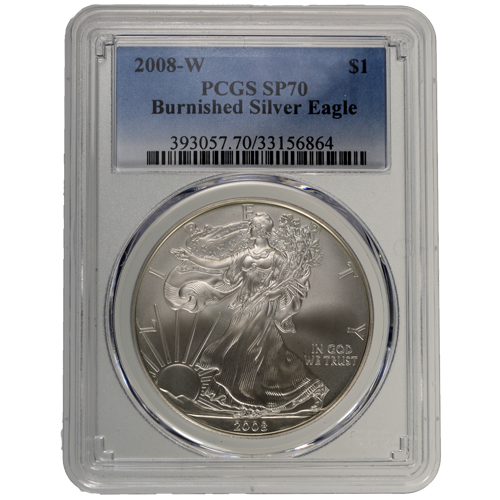 The Silver American Eagle is one of the world’s most popular coins, and it’s not hard to understand why. With beautiful designs on both the obverse and reverse, the official silver coin of the United States is produced annually in bullion, proof, and burnished versions. Right now, the 2008-W Burnished Silver American Eagle Coin is available with special Specimen Proof grade online at Silver.com.

Each of the 2008-W Burnished Silver American Eagle coins listed here today is considered a perfect specimen proof by the PCGS. Coins in this condition show full, original mint luster and lack all detracting flaws. Specimen proof coins are unique in that they display some of the characteristics of a standard proof, but also have uniquely beautiful aspects not found in an average proof coin.

The obverse of the 2008-W Burnished Silver American Eagle coin includes Adolph A. Weinman’s iconic Walking Liberty design. This was created in 1916 and used on the nation’s 50-cent piece through 1947. It depicts Lady Liberty as she strides forward into a brighter future, as indicated by her march toward the setting sun.

On the reverse of all 2008-W Burnished Silver American Eagle coins is the image of the heraldic eagle of the United States. Created in 1794, this 1986 refinement of the design was completed by John Mercanti, who at the time served as the Chief Engraver of the United States Mint. The heraldic eagle features the American bald eagle set behind the nation’s shield, clutching its arrows of war in one talon and the olive branch of peace in the other.