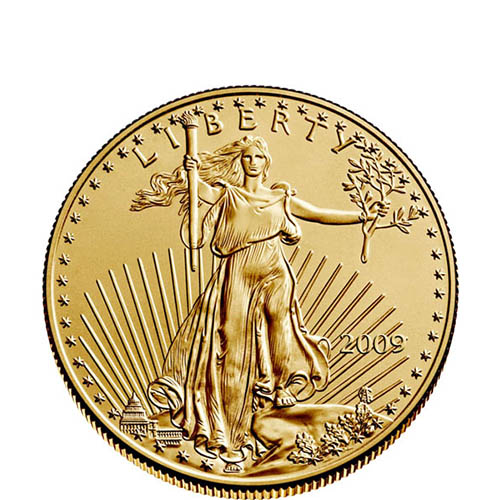 Any quantity available for $209.99 per coin over spot!

Global demand for precious metals in 2009 caused production issues for the US Mint. Yet with all of the global financial issues of the previous ten to twelve years – Y2K and the Great Recession of 2008 (which continued into the first half of 2009) – three of the five highest mintage years of Gold American Eagle coins occurred in 1998, 1999, and 2009. Only one year – 1986 – minted more 1/2 oz American Eagles than were done in any of these three years. Right now, Silver.com has a 2009 1/2 oz Gold American Eagle coin available for you to purchase.

The obverse of the 2009 Gold American Eagle coin features the Augustus Saint-Gaudens’ Lady Liberty design. It is a full-length figure of Lady Liberty, who appears to be walking right off the coin. Lady Liberty’s hair is flowing in the breeze behind her, and she is carrying a torch in her outstretched right hand while carrying an olive branch in her left hand.

The reverse of the 2009 Gold American Eagle coin features the design created by Miley Busiek and sculpted by Sherl J. Winter. A male eagle, carrying an olive branch in its claws, is flying towards a nest with a female eagle and a couple of eaglets. It is to symbolize the importance of family in America. It includes several inscriptions as well.

These obverse and reverse designs on the Gold American Eagle coins are the result of President Theodore Roosevelt’s dislike of the artistic appeal of US coinage at the time. In 1904, without asking Congress, President Roosevelt requested that the talented Augustus Saint-Gaudens be employed to create a design that would return beauty to our US coins. The resulting Saint-Gaudens’ Lady Liberty creation appeared on the Eagle ($10) and the Double Eagle ($20) gold coins. It is a version of that Lady Liberty that now appears on the Gold American Eagle coins.

Have questions? Our Silver.com Customer Service team is ready to assist you. We can be reached via phone at 888-989-7223, via our online live chat, or via our email address.