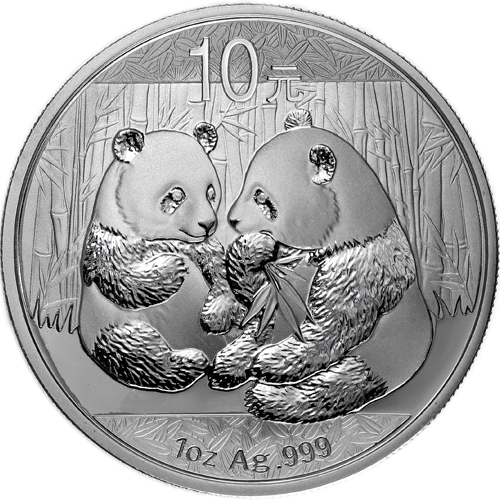 The official silver bullion coin of the People’s Republic of China, the Silver Chinese Panda is an annual release from the Chinese Mint that celebrates some of the nation’s most important images. The Giant Panda is highlighted on the obverse face each year, while the Temple of Heaven in Beijing is a stalwart on the coin’s reverse. Right now, the 2009 1 oz Silver Chinese Panda Coin is available as a Brilliant Uncirculated specimen on Silver.com.

Silver Chinese Panda coins focus on the endangered species of the Giant Panda. Native to the nation of China, these lovable bears are found only the mountainous regions of south and central China. The animals are listed as endangered, and the most recent estimates put their wild population anywhere between 1,500 and 3,000.

The Temple of Heaven has been the consistent design feature of the Silver Panda’s reverse face since it was introduced in 1983. Although one building is featured in the design, the actual temple is part of a larger complex constructed between 1406 and 1420. Emperors previously used it as a religious and social gathering place.

On the obverse of the 2009 1 oz Silver Chinese Panda coin you’ll find the image of two pandas as they eat. A mainstay of the design motif in recent years has been the use of a bamboo wall in the background, which once again features on the 2009 coin.

The reverse of the Silver Panda features the aforementioned Temple of Heaven design. Included along with this image are the engravings of the coin’s year of issue, as well as the Mandarin Chinese characters for “People’s Republic of China.”

Each of these 2009 Silver Chinese Panda coins from the Chinese Mint is a BU specimen. Coins in Brilliant Uncirculated condition show no signs of wear and tear, however you may notice detracting flaws such as breaks in the luster, spotted surfaces, or minor contact marks from the coining process.

All Silver Chinese Panda coins are produced by the Chinese Mint. The mint is controlled by the government of the People’s Republic of China and overseen on a daily basis by the People’s Bank of China.

If you have any questions, please don’t hesitate to ask a Silver.com customer service associate. You can reach us on the phone at 888-989-7223, chat with us live online, or submit your questions via email.