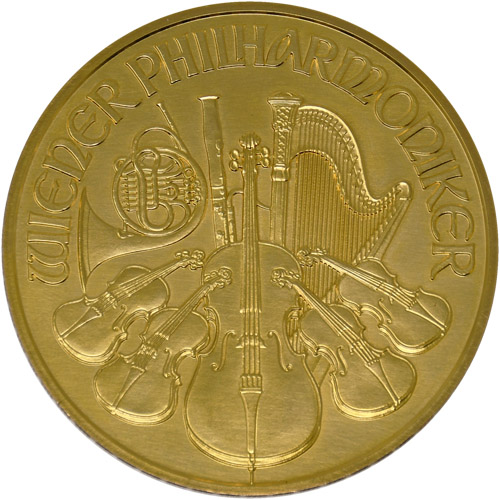 The 2009 20 oz 20th Anniversary Austrian Gold Philharmonic Coin has a limited mintage of only 6,027 coins. This series has released coins in North America, Europe, and Japan with only 2,009 coins going to each region. The 2009 coin is issued with a face value of 2,000 euros backed by the Austrian government. This coin commemorates the Austrian Philharmonic by including imagery of musical instruments that are commonly used in the orchestra.

On the obverse of the 2009 20 oz 20th Anniversary Austrian Gold Philharmonic Coin, there is an image of the great pipe organ from Musikverein, a very prestigious concert hall that was established in Vienna. In the concert hall, the pipe organ is fixed to the wall where the orchestra typically performs. The obverse of the 2009 coin also includes the face value of the coin, the coin’s weight and purity, the inscription “REPUBLIK OSTERREICH”, and the coin’s year.

The reverse of the 2009 20 oz 20th Anniversary Austrian Gold Philharmonic Coin shows an assortment of musical instruments that are popular in the orchestra. Instruments pictured on the coin include a cello, four violins, a harp, a bassoon, and a French horn. The reverse also has the inscription “WIENER PHILHARMONIKER”. Both designs on the 2009 coin were created by the Chief Engraver of the Austrian Mint, Thomas Pesendorfer.

If you have any questions when you buy gold online, our team at Silver.com can provide answers. Call us today at 888-989-7223, or chat with us via email or online live chat.