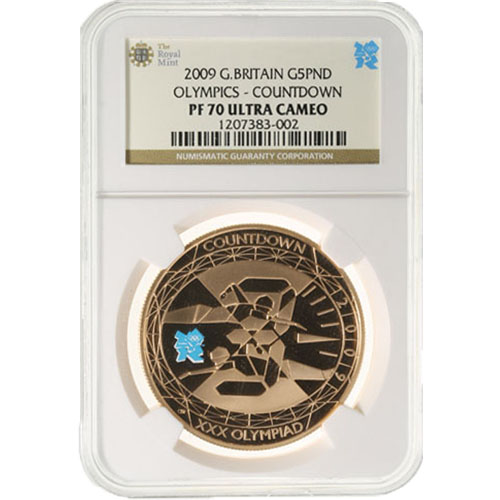 The Royal Mint of England celebrated the city of London’s opportunity to host the 2012 Summer Olympics and Paralympics with a series of countdown coin releases in the years leading up to 2012. The first of the three coin designs issued by the mint in this commemorative series was the 2009 Olympic Swimmer design. Now, 2009 5 Pound Gold Great Britain Olympic Countdown Coins are available to purchase online at Silver.com with NGC certification.

The city of London hosted the 30th edition of the Summer Olympic games in 2012. The city and the nation put on a grand display for Britons and global visitors, with a host of new venues constructed to host the various games from swimming and diving to track and field.

In the Olympic Countdown Series, the Royal Mint of England offered three separate designs for each year between 2009 and 2011 leading up to the games in the summer of 2012. The designs included athletes representing different competitions with a number corresponding to the years until the games would arrive in London.

The reverse of these 2009 5 Pound Gold Great Britain Olympic Countdown Coins includes the image of two swimmers moving in opposite directions. The swimmers both move through the digitized number “3,” as 2009 marked three years until the games would arrive.

On the obverse face of 2009 Gold Great Britain Olympic Countdown Coins is a depiction of Queen Elizabeth II. In this fourth-generation design from the Royal Mint of England and Ian Rank-Broadley, the Queen is shown in right-profile relief wearing the crown on her head.

These 2009 5 Pound Gold Great Britain Olympic Countdown Coins all received a PF70 certification from the NGC. Coins in this condition are considered perfect and feature full, original mint luster with no detracting flaws of any kind. The included UCAM label stands for ultra-cameo and means that each coin has strong, frosted design elements overlaying deeply-mirrored, clear background fields.

We encourage Silver.com customers to contact us with questions about these gold coins for sale at 888-989-7223. You can also connect with us online using our live chat or simply send us an email with your inquiries.