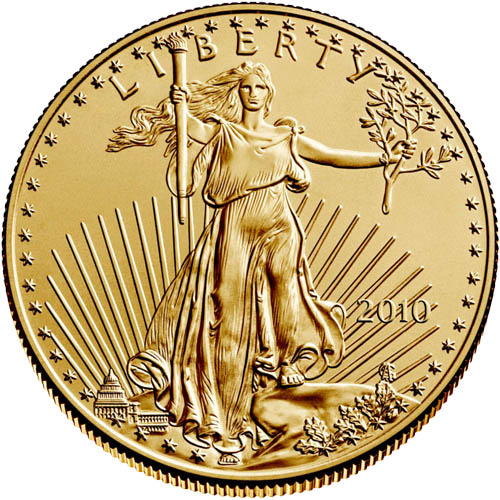 In 1986 and 1987, when the Gold American Eagle coins were first released, demand for these coins were very strong. Sadly, the following nine years saw mixed demand for the Gold Eagles, with no year coming even close to the demand of those first two years. Then came the years leading up to Y2K, and concerns regarding what effect Y2K was going to have on the global financial world. This concern pushed people toward the comfort of metals. The four years of 1997 through 2000 saw the demand for Gold Eagle coins surge, which included their all-time high in 1999. However, after 2000, demand again cooled off for a bit until the Great Recession, beginning in 2008. Since 2008, the demand for Gold Eagles has continued at the Great Recession higher levels. Currently, Silver.com has a 2010 1/2 oz Gold American Eagle coin available for purchase.

President Theodore Roosevelt had grown tired of the artistic blandness of the US coinage and wanted it upgraded. In 1904, President Roosevelt obtained the services of the talented Augustus Saint-Gaudens, who was one of the first Americans to study sculpture at the Ecole des Beaux-Arts. Saint-Gaudens was tasked with creating a design that would return beauty to our US coins. This resulting Saint-Gaudens’ Lady Liberty design appeared on the Eagle ($10) and the Double Eagle ($20) gold coins. It is a version of that Saint-Gaudens’ Lady Liberty that now appears on the Gold American Eagle coins.

The obverse of the 2010 Gold American Eagle features Saint-Gaudens’ Lady Liberty, appearing to walk right off the coin to you. Her long hair flowing in the breeze, her right arm outstretched, holding a torch and her left hand carrying an olive branch.

The reverse of the 2010 Gold American Eagle coin features a family of eagles, to symbolize the importance of family in America. This design is the creation of Miley Busiek and was sculpted by Sherl J. Winter. It includes several inscriptions as well.

If you have questions, our Silver.com Customer Service team is ready to answer them. We can be reached via phone at 888-989-7223, via online live chat, or via our email.