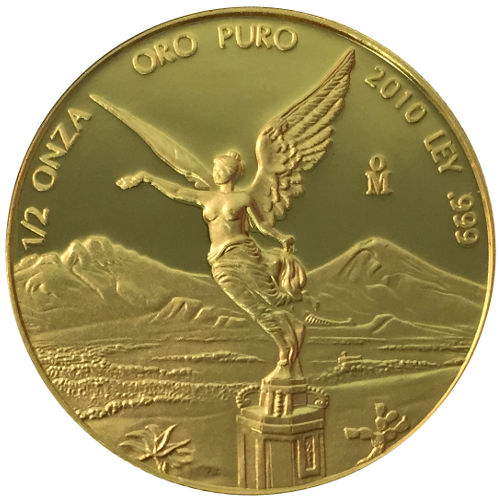 Mexico’s Gold Libertad coin is more than just the official gold coin of the nation, it is the successor the nation’s popular gold Centenario. Using design motifs inspired by the nation’s centennial celebration of its independence back in 1920, the Gold Mexican Libertad is a modern version of the Centenario that features refined design sets. Right now, the 2010 ½ oz Proof Gold Mexican Libertad is available on Silver.com.

Gold Mexican Libertad coins are produced on an annual basis by the Mexican Mint in both a proof and bullion version. The proof version of the coin is struck using a special coining process. Specially made planchets are loaded into coining presses at the mint and struck several times by the die cast, creating the stunning finish visible on both sides of these coins.

On the obverse side of each coin you’ll find the image of Winged Victory. Featured atop a pillar, this depiction of the angel of independence is a replica of a statue standing in the center of Mexico City that was erected in 1920 to honor 100 years of Mexican independence from Spain.

The reverse side of all Proof Gold Mexican Libertad coins bears the official seal of the nation. The Mexican coat of arms features an eagle atop a cactus branch as it battles to control a serpent. In the seal, a wreath encircles the bottom of the symbol, while the name “Estados Unidos Mexicanos” is engraved above.

The Mexican Mint is the oldest operating facility in North America, having been founded by Spanish conquistadors in 1535. If you have questions about these products, don’t hesitate to reach out to a Silver.com associate at 888-989-7223. You can also connect with us online through our live web chat and email services. If you want to view similar products, please visit our Mexican Mint page.