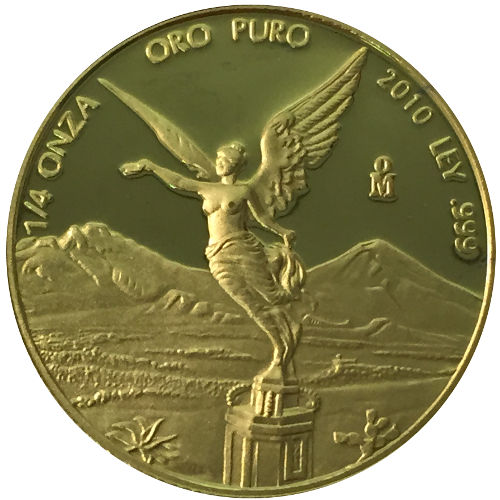 When collectors look for that perfect coin to add to their inventory, the Proof Gold Mexican Libertad is increasingly popping up as a must-have product. Featuring inspirational design sets and impressive gold purity, the proof version of Mexico’s official gold bullion coin is an in-demand precious metal coin in the current marketplace. Now, the 2010 ¼ oz Proof Gold Mexican Libertad coin is available for purchase on Silver.com.

The image of Winged Victory that appears on the Gold Mexican Libertad is one that defines Mexican independence from Spain. Known as the angel of independence, she is always featured with a wreath crown in her right hand as a symbol of the nation’s control over its future. The broken chains in her left hand symbolize Mexico’s freedom from Spanish rule.

Winged Victory was originally a spiritual force for the Mexican people during the War of Independence, and took on greater meaning as the symbol of Mexico City after a statue of her likeness was erected in the city’s center in 1920 as the nation marked 100 years of independence.

On the obverse side of each 2010 ¼ oz Proof Gold Mexican Libertad is a replica of the statue of Winged Victory. Behind her, the twin volcanic peaks of Popocatepetl and Iztaccihuatl rise to meet the sky.

The reverse of each coin bears the coat of arms for Mexico. In this official seal, an eagle is featured on its perch atop a cactus as it battles a serpent with its talons and beak. It is surrounded by a wreath along the bottom and the full name of Mexico, “Estados Unidos Mexicanos,” across the top.

Each of these brilliant Proof Gold Mexican Libertads started as a special planchet at the Mexican Mint, and was struck multiple times by die casts to create a background field that is deeply-mirrored.

If you have questions, a Silver.com associate is standing by to help answer those inquiries. You can reach us at 888-989-7223, online through our live chat, or via email. If you are looking for similar products, be sure to stop by our Mexican Mint page.