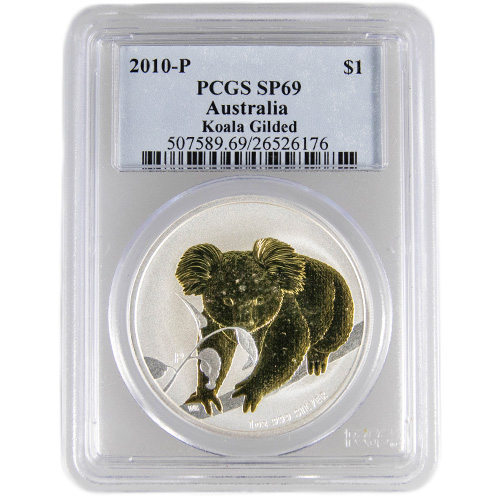 As one of the most popular animals in Australia, this coin release holds special meaning for the Australian continent with its koala imagery. The Australian Koala coin series produced by the Perth Mint has had immense success over the years, with releases every year that feature exclusive new designs for coin investors and collectors worldwide to enjoy. Right now, the 2010 1 oz Silver Australian Koala Coin PCGS SP69 Gilded can be purchased online from Silver.com.

The 2010 1 oz Silver Australian Koala Coin PCGS SP69 Gilded was struck in 99.9% fine silver and bears a face value of $1 AUD that’s been fully backed as a legal tender of Australia. This coin release features a gilded quality, meaning it has thin layers of 24-karat gold on certain design elements, making this coin a truly special addition to the series. The grading of SP69 from the PCGS indicates that this coin is near-perfect with no more than two minor flaws. The flaws are usually minuscule contact marks or hairlines that are outside the coin’s central focal point.

The Australian Silver Koala Coin collection was first released by the Perth Mint in 2007. Since then, multiple bullion products have been released in this collection, with the 2010 releases being the third year of production. This coin series brings significance to one of the most popular creatures in Australia, the koala.

On the obverse of the 2010 1 oz Silver Australian Koala Coin PCGS SP69 Gilded is the effigy of Queen Elizabeth II shown from her right profile. In the image, Queen Elizabeth II is wearing a glorious crown. The image of the Queen has been used on many bullion product releases around the world to honor her as a renowned leader.

The reverse of the 2010 1 oz Silver Australian Koala Coin PCGS SP69 Gilded shows a koala as it climbs along a tree branch. The reverse shows intense detailing of the koala so the viewer can make out its textured skin and furry ears. The reverse also shows the “P” mint marking for the Perth Mint, along with the coin’s purity and weight.

If you have any additional questions about silver for sale, our team at Silver.com is here to help. Give us a call at 888-989-7223 or use our online live chat or email features to contact us.